Authorities are looking into the origins of a human skull, foot and heart preserved in formaldehyde discovered in boxes at the Rama III branch of international courier DHL on Saturday night. 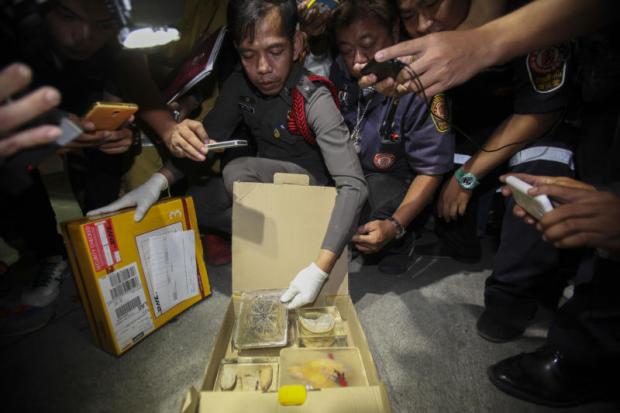 They suspect they were stolen from a medical school, then sold to foreigners who planned to send them home as gifts.

The parts had been sent for examination at King Chulalongkorn Memorial Hospital's Forensic Medicine Department to try to determine whose they were, said Pol Maj Gen Chawalit Prasopsin, chief of Metropolitan Police Division 5. Dr Udomsak Hunwijit, director of the Forensic Medicine Department at King Chulalongkorn Memorial Hospital, said the initial examination shows the body parts are human and that they were well-preserved, as though carried out by a person knowledgeable in the field.

Detectives sent to examine the three boxes said they discovered human organs in acrylic display boxes inside them. They said the body parts, including a baby's foot, were inside the boxes.

They also discovered two pieces of skin with tattoos of a tiger and a mystic symbol. The skin appeared to be human, police said.

DHL employee Anirut Nila, 43, responsible for examining parcels at his office, said the three boxes had been collected from DHL's Maboonkrong branch and had labels suggesting the items inside were toys. He said he found the boxes suspicious when they were scanned.

Police said delivery information on the boxes suggest Eugene Johnson, residing in Pathumwan district of Bangkok, was the sender. They were destined for Las Vegas, Nevada, in the US, police said.

Police questioned two foreigners believed to be connected with the body parts, said Pol Col Chumpon Phumpuang, deputy chief of Metropolitan Police Division 5. One of them allegedly confessed to having possessed the boxes. Police declined to give the names and nationalities of the men.

One of the men allegedly said he bought the flesh for thousands of baht from a vendor at a market in the Thonburi area. He said the organs were gifts for his friends in the US. No charges have been filed against the man. He gave his fingerprints and was released, police said.

It was not clear when the results of the forensic tests will come out.