Deputy police chief Pol Gen Ruangsak Jaritek points at a picture of the body parts found in the DHL parcels, with Udomsak Hunvijit (right) of the Forensic Science Department of Chulalongkorn University explaining at a press conference at Bang Phongphang police station.

Part of the mystery surrounding the body parts found in the DHL parcels was unveiled on Monday when the medical faculty of Siriraj Hospital said they were stolen from its museum last month. 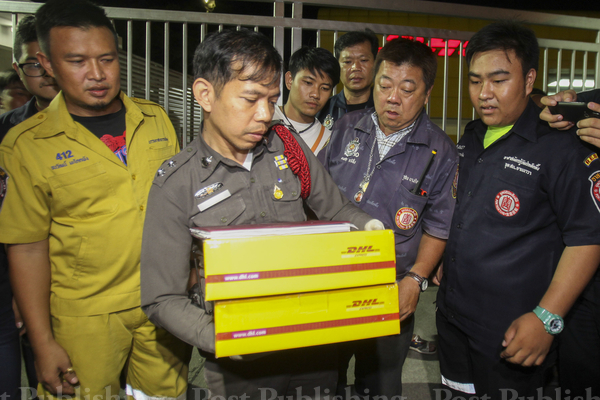 Bang Phongphang police take parcels for examination on Saturday night after DHL alerted police that they contained human parts of an infant. (Photo by Pattarapong Chatpattarasill)

The announcement came as it was revealed that a foreigner involved in the scandal has a controversial background in the hard-punk sub-culture in the United States.

Faculty dean Udom Kachintorn said the five bottles containing human organs found in three parcels consigned to an address in the United States belonged to the museum. It had only just been discovered they were stolen last month.

Three of the items were from the anatomy department and the other two from the forensic science department.

They were part of the display at Siriraj Medical Museum before they were stolen, Dr Udom said.

Siriraj checked the footage of security cameras back to last month and it was found that one of the two foreigners who were interrogated by police had visited the museum. However, the security camera footage did not show whether the man had stolen the items, he said.

Dr Udom said the faculty had filed a complaint with Bangkok Noi police station, asking that they investigate how the displays were removed, and whether any staff at the museum were involved.

The dean said Siriraj had not been aware the items were missing because individual departments contributed their collections for exhibition at the museum.

The three parcels were consigned to be sent by DHL to Las Vegas. The contents were revealed on Saturday night after DHL staff x-raying the packages prior to shipment reported they did not conform with the stated contents on the consigment notes.

The parcels were collected from the DHL outlet at MBK shopping mall with items inside being declared as "toys".

Bang Phongphang police questioned two foreigners believed to be linked to the parcels on Saturday night and released them afterwards without pressing charges.

The men told police they had bought the infant's head and other organs from a night flea market at Saphan Phut (Memorial Bridge) but could not remember the directions to the shop, Chumpol Pumpuang, deputy chief of Division 5 of the Metropolitan Police Bureau (MPB), said on Sunday.

Sombat Milintajinda, a MPB officer assigned to the case, said on Monday that the two foreigners left the country on Monday morning to Cambodia through Aranyaprathet district in Sa Kaeo province. One of them was identified as Ryan Edward McPherson.

Pol Col Sombat did not identify the two men's nationality of the two. But Pol Col Chumpol told AP on Monday that one of them is a 31-year-old American tourist.

That matches Mr McPherson, 31, a native of La Mesa, California, according to Wikipedia.

The man is a director of "Bumfight", an alternative film series, who also claims to be a member of Straight Edge, a subculture of hardcore punk, according to Wikipedia. He has a personal webpage depicting his "work", www.stabtheprincess.com.

Ryan McPherson, also known as Ryen McPherson, and his friends who produced ''Bumfight'' were arrested after the first episode was released, and faced several charges.

He was sentenced to 280 hours of community service at a homeless shelter in 2003. Three years later, the San Diego court denied a second appeal against jail time by Ryen, concerning an alleged probation violation.