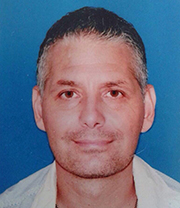 Body believed to be Hanspeter Suter was washed ashore in Lang Suan district of Chumphon.

Police at Lamae station in Lang Suan district were first informed a body found on the beach.

It  wqas that of a caucasian man, estimated at 45-50 years old, wearing orange shorts and black shoes, with one gold tooth and a tattoo at his back. He had been dead about 10 days.

The police later checked the information with Koh Tao police, askig if it could be  the missing Swiss tourist who went snorkel alone on Nov 8.

Koh Tao police confirmed that the body was Hanspeter, 44. His body will be sent for autopsy at Surat Thani hospital on Tuesday afternoon. His friend will be at the hospital to identify him, Thai media reported.

More than 1,000 coronavirus infections were detected at a chicken processing plant in Phetchabun after 64% of 7,000 workers have been vaccinated.