PHUKET — A mahout was killed by his elephant in musth at a camp in Muang district on Tuesday. 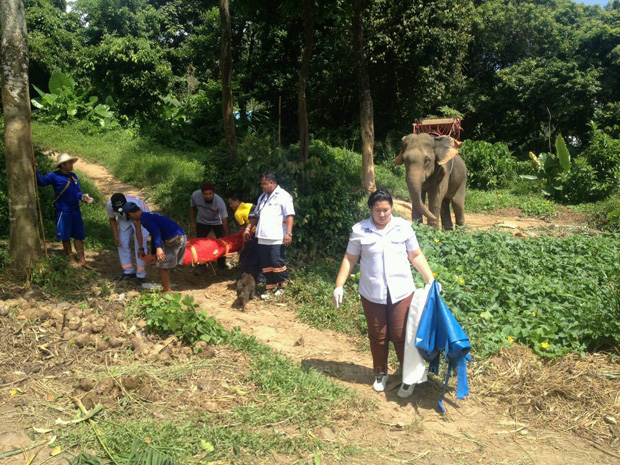 Rescuers prepare the body of a mahout for transport after he was killed by a 23-year old male elephant  in musth at an elephant camp in Phuket's Muang district on Tuesday. (Photo by Achataya Chuenniran)

Police said 21-year-old mahout Wittawas Sala-ngarm from Surin was attacked by 23-year-old Sidor elephant named Nong Por while he was unchaining him for tourist rides in Phuchaya elephant camp at 10am. Sidor is a name used for male elephants with short tusks.

An investigation found the elephant jabbed the young handler with his tusks in the torso and arms, killing him on spot, while in a lust-fuelled frenzy.

Police believed the jumbo was upset when Wittawas was trying to control him.

The accident is the second involving pachyderms this week. On Sunday, a rampaging male elephant killed his mahout and fled into a forest with a Russian female tourist and her 8-year-old daughter on his back. They were recovered safely.

In both cases, the elephants were in musth, a periodic condition in bull elephants display highly aggressive behavior and experience a large rise in reproductive hormones.