ACM Prajin Juntong said the Airport Rail Link, which connects Suvarnabhumi airport and Bangkok's inner district of Phaya Thai, would be extended to Don Mueang airport in northern Bangkok and to U-Tapao airport in the eastern province of Rayong, near Pattaya. 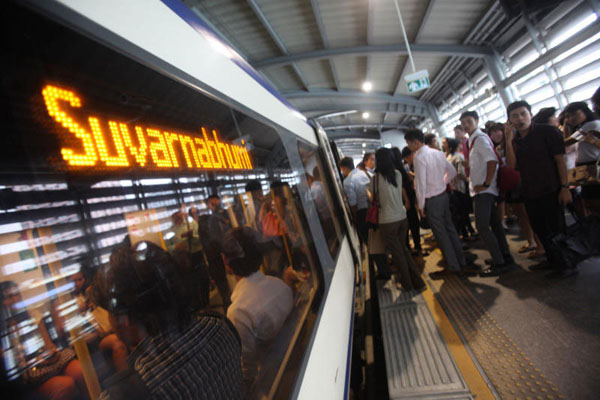 Work on the extension will begin with a 22-kilometre-long link from Phaya Thai to Don Mueang, he said. The estimated cost of this section was 29 billion baht.

The National Environmental Board already approved the plan, but the cabinet had yet to endorse it, ACM Prajin said.

For the 190km extension to U-Tapao, which is now rated an international airport, the minister said transport authorities would have to discuss it with the Royal Thai Navy, which supervises the airport. He expected the talks to be concluded in the second half of next year.

The route for the Airport Link to U-Tapao would also have to be finalised, and a decision made whether it should start from Suvarnabhumi, Makkasan or Lat Krabang area of Bangkok. Six stations were planned along the route and their locations would have to be decided, the minister said.

These would be Chachoengsao, Chon Buri, Si Racha, Pattaya, U-Tapao and Rayong stations.

ACM Prajin said the Airport Rail Link was now serving 1.4 million passengers a month, above its target of 1.2 million.