Frustrated villagers in northern Nan province on Thursday turned their bumpy dirt road into a banana plantation in protest over authorities ignoring their hardship. 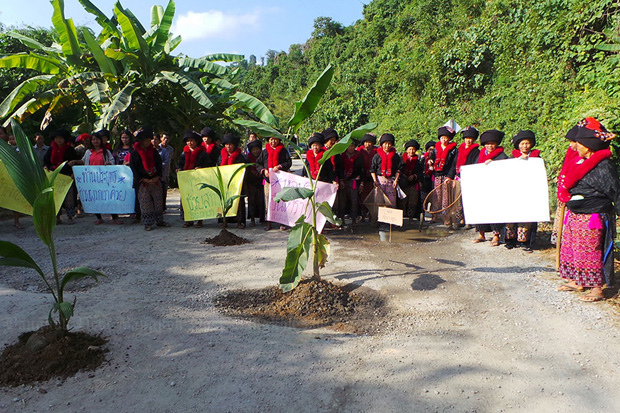 Protesting residents plant banana trees on a damaged dirt road in their community in Nan. (Photo by Rarinthorn Petcharoen)

More than 100 villagers of Ban Nam Ngam in tambon Bo planted bananas and papaya trees in a pothole-marred dirt section of Raipaiwan-Santiparb route. The damaged road section covers a distance of more than 11 kilometres. Some holes are so deep they have turned into fish ponds.

The locals, some of whom carried a banner calling for authorities to address their grievances, have waged a battle to have the road repaired for more than six years. They complain the dirt track has taken a heavy toll on their lives and vehicles.

Marisa Phanompibul, a native of Ban Nam Ngam, said she wanted the road to be repaired quickly as many residents have been badly affected. Children have to travel along the bumpy road to school, while the elderly and sick have to get to hospital.

Accidents are common and two people have died so far, the village head said.

The villagers had earlier lodged a complaint with the Bang Bo tambon administration organisation to set aside funds to repair the road, but the local body claimed the cost of repairs was beyond its authority to approve, Mr Saroj said. A similar complaint had also been lodged with provincial authorities, but there had been no response.

He called on relevant agencies to make a serious effort to address the problem as the damaged road is a main transportation route for residents from several villages. 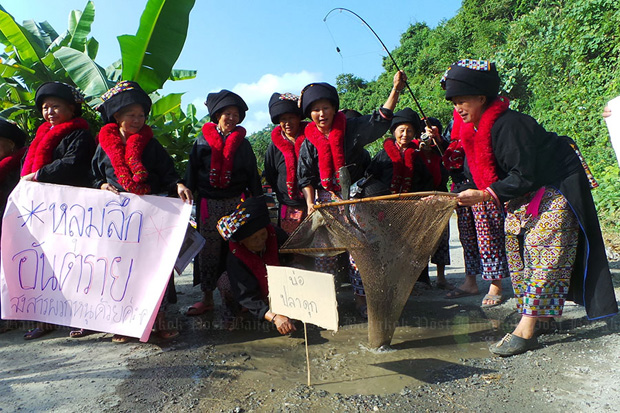 Villagers turn a hole on the damaged road into a fish pond. (Photo by Rarinthorn Petcharoen)