Hours at the Mae Sai border checkpoint will be extended in December to serve growing border trade and tourism between Thailand and Myanmar. 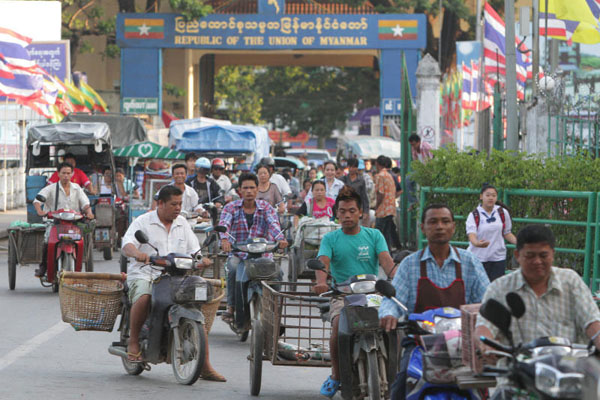 Myanmar traders cross the border into Mae Sai district of Chiang Rai to resume their daily business on the Thai side. (Photo by Tawatchai Kemgumnerd)

Somchai Rungsakhon, chief of Mae Sai district in Chiang Rai province, said on Friday that from Dec 1, the border would be open for crossing until 9pm, instead of the current 6.30pm. The checkpoint will continue to open at 6.30am.

He added that, next year, the checkpoint's closing time would be extended to midnight.

Mae Sai district receives as many as 5 million visitors annually. The border pass there is in Wiang Phang Kham sub-district and is 61 kilometres from the centre of Chiang Rai.

Mae Sai is the northernmost district of Thailand and is adjacent to Tachileik town in Myanmar. Both localities are separated by the Sai River which marks the border there.

The value of Thai-Myanmar trade through the Mae Sai border pass stood at 12.15 billion baht in the 2014 fiscal year ending Sept 30, and Thailand posted a trade surplus of about 11 billion baht there.