The United Nations on Friday criticised the country's military leaders for arresting students flashing the signature protest gesture from <i>The Hunger Games</i> while the film's makers have said they are concerned for the young activists. 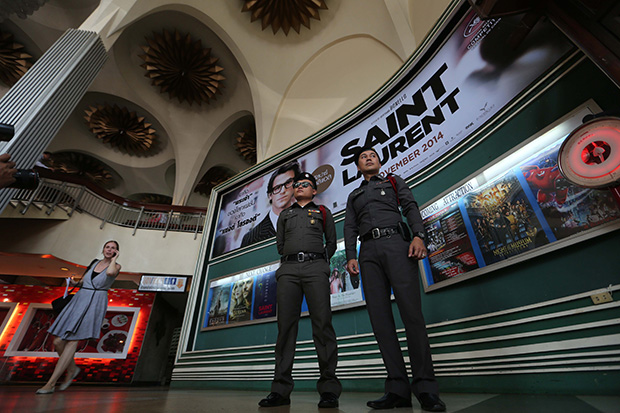 Police stand inside the Apex Group's Scala theatre in Bangkok where two student activists were arrested in connection with the showing of 'The Hunger Games: Mockingjay - Part 1'. (Photo by Pattarachai Prechapanich)

Fallout from Thursday's detention of three students outside two Bangkok theatres continued on Friday with Prime Minister Prayut Chan-o-cha saying he felt unthreatened by The Hunger Games' three-fingered protest against totalitarian rule, but nonetheless warned people against using it.

"I don't know whether it is illegal or not but it could jeopardise their futures," Gen Prayut told reporters at Government House.

His comments came as the UN Office of the High Commissioner for Human Rights (OHCHR) in Southeast Asia criticised the authorities for a recent spate of instances in which people were led away for questioning after making the salute that has become a symbol of defiance for anti-coup protesters.

"This case is the latest illustration of a worrying pattern of human rights violations, which has the effect of suppressing critical and independent voices," local OHCHR representative Matilda Bogner told AFP. 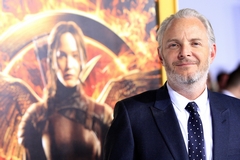 Director Francis Lawrence, shown above at the Los Angeles premiere of 'The Hunger Games: Mockingjay - Part 1' on Monday, says he is uncomfortable with young people "doing things that are getting them arrested". (EPA Photo)

The director, producer and writers of The Hunger Games: Mockingjay - Part 1 also have been watching reaction to their latest sequel in Thailand. They said that while they feel honoured that their film has become an inspiration, they worry about protesters putting themselves at risk by mimicking the Mockingjay protest movement.

"My goal is not for kids to be out there doing things that are getting them arrested," director Francis Lawrence said in a Friday interview with Buzzfeed. "It's just when the stakes become real, and ... they're affecting people and affecting families. It gets very, very complicated.

"In a sense, part of it is an honour that there (are) ideas in the movies that we're making that (have) become so important to people that they are willing to risk something and use that symbol," he continued. "But it's so scary."

Screenwriter Peter Craig echoed his director's comments. "That's a tense political situation where I feel badly for the kids," he said. "I just hope everybody's all right."

"I still cringe when (I) see people doing these things and getting arrested," Lawrence continued. "You just hope that people really understand the consequences that they're going to be facing, whether right or wrong."

The consequences were short detentions for two students apprehended on Thursday outside the Apex Group's Scala cinema for giving media interviews, and a third outside Major Cineplex Group's Siam Paragon theatre for flashing the three-finger salute. They were released without charges.

"I didn't want to punish [the students] so they were merely reprimanded, released and told not to do it again because it's of no benefit to anyone," Gen Prayut told reporters.

The general also denied any role in Apex's decision to pull the film from its Scala and Lido theatres.

"I am not involved in that," Prayut said, adding that he had even seen some of the latest Hunger Games instalment.

Noru has weakened to a low-pressure system but continues to bring heavy rain to many areas, with a continuing threat of more flooding, the weather office says.

A "Pink Devil" roars down Bangkok's busy streets, furiously overtaking tuk-tuks, cars and motorbikes, narrowly avoiding a collision as it slows to allow passengers to scramble on before veering back into the capital's hectic traffic. Welcome aboard the No.8 bus.