CIB chief and 7 others arrested, charged

Two more on the run

Central Investigation Bureau (CIB) chief Pongpat Chayaphan and seven other people including officers have been arrested on a number of serious charges, a police spokesman confirmed on Sunday. 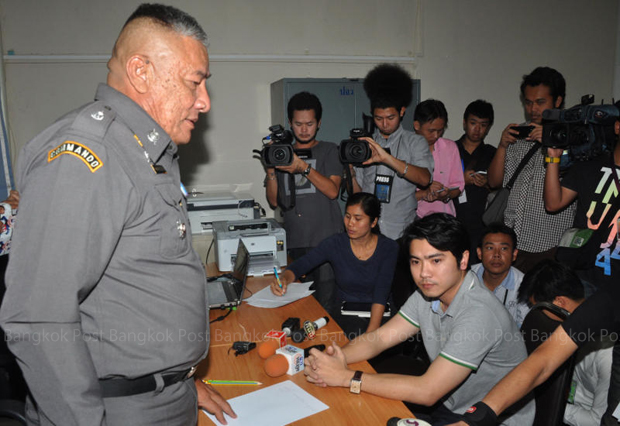 A file picture dated June 6, 2014, shows the Central Investigation Bureau chief Pol Lt Gen Pongpat Chayaphan questioning a resort owner over his alleged connection with a casino. Lt Gen Pongpat is under arrest, according to a police spokeman. (Photo by Wassayog Ngamkham)

Spokesman Prawut Thawornsiri said the eight had warrants issued for them and have been arrested. Police will seek approval from the Criminal Court on Monday for detention. The spokesman refused to disclose the location where they are being held or exactly when the arrests were made.

The Daily News newspaper reported on Sunday that Pol Lt Gen Pongpat was detained for interrogation on Saturday, the same day that the court endorsed the warrants dated Friday and sought by national police chief Somyot Pumpanmuang.

The spokesman said Mrs Sawong and Mr Roengsak are on the run and police are trying to locate them. He claimed the people arrested had confessed their crimes to investigators.

Pol Col Wuthichart is on charges of demanding and taking bribes under Sections 148 and 149 and malfeasance under Section 157 of the Criminal Code.

Mrs Sawong and Mr Roengsak are charged with possessing the carcasses of protected animals in violation of the Wildlife Protection and Conservation Act.

All of the police officers had earlier been transferred to the police operations centre at the Royal Thai Police Office, along with Akrawut Limrat, an officer of the Crime Suppression Division who was pronounced dead at Phra Mongkutklao Hospital on Thursday after sustaining several spinal fractures in a "fall from a high place".

Pol Lt Gen Pongpat and Pol Maj Gen Kowit Wongrungroj were transferred from the CIB to the police head office by the police chief on Nov 11 with no clear reasons. Pol Gen Somyot only said later that the two would be given an "important assignment".

The spokesman said Pol Col Akrawut had been linked to the arrested officers but did not face arrest.