The Electricity Generating Authority of Thailand (Egat) has confirmed Thailand will have to build more coal-fired power plants to meet its energy needs since future supplies of natural gas are uncertain and renewable energy is expensive. 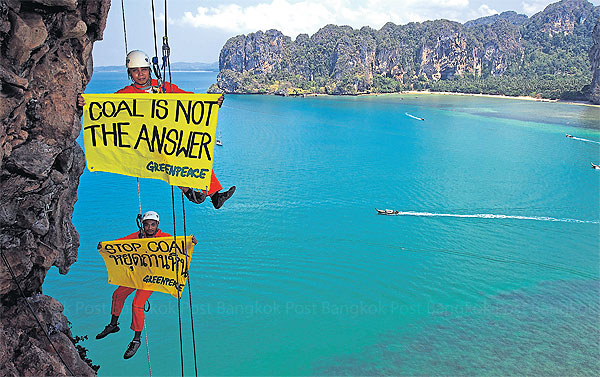 Activists made the Greenpeace point dramatically while hanging from a cliff at Railay Beach in Krabi province two months ago. The problem, says Egat, is that natural gas and renewable energy sources are also not the answer. (AFP photo)

Wiwat Chancherngpanich, Egat's assistant governor for power plant construction, said Thailand has no choice other than coal if it wants to strengthen energy production at a fair price because natural gas supplies are very uncertain since Myanmar, the country's main supplier, has a policy to reserve most natural gas for domestic use.

Renewable energy such as hydroelectric power plants and solar cells also have unstable production capacities, are not commercially viable on an industrial scale, and involve high investment costs, he said.

At present, 68% of Thailand's electricity is produced from natural gas, 9% from coal power plants and the rest from other fossil fuels and renewable energy. The country's energy consumption also goes up 3% every year and it is estimated it will increase from 32,395 megawatts in 2011 to 70,685 megawatts in 2030.

The Egat's third revised Power Development Plan (PDP) for 2012-2030 aims to reduce natural gas consumption to 58% by the end of 2030, while increasing the use of renewable energy to 25% by the end of the plan. Hydropower dams are to produce 5,803.9 megawatts and solar cell farms 3,802.1 megawatts by the same year.

"Although we have attempted to increase renewable energy due to environmental concerns, we do need to accept the fact that the power output is not stable. We want to increase use of more stable sources of energy to prevent an energy crisis. There is nothing better than coal as the current choice," Mr Wiwat said.

The PDP calls for 4,400 megawatts to be produced from high-grade coal power plants by 2030. This would increase reliance on coal-fired power plants from providing 9% of energy consumption at present to 12% in 2030.

The Egat already completed an Environment and Health Impact Assessment study for the Krabi plant and will submit it to the Office of Natural Resources and Environmental Policy and Planning next month.

The Songkhla plan is at the public hearing stage, which is expected to be completed by the middle of next year.

Given the disastrous environmental and public health experience Thailand had with the Mae Moh lignite power plant in Lampang, Mr Wiwat said he understands the public's concern about the impact of coal power plants.

He said that, unlike the Mae Moh plant which uses lignite, the lowest grade of coal, the Krabi and Songkhla plants will use high-grade sub-bituminous coal from Indonesia and South Africa, together with high technology to reduce nitrogen dioxide and sulphur dioxide particle emissions into the atmosphere.

In an effort to convince the public of the safety of modern coal-fired power plants, the Egat organised a tour by the Thai press to the Schwarze Pump lignite-fired power plant in Berlin, claiming that the technology had made great advances to ensure safe emissions.

The 1,600-megawatt Berlin plant consumes 36,000 tonnes of lignite per day but the company has invested in a gas and particle filtration system that satisfies Germany's strict environmental and public health safety standards. The plant claims that the technology can capture 98% of dust, 91% of sulphur dioxide and 61% of nitrogen dioxide.

However, the technology is not able to limit carbon dioxide emissions, and coal power plants are the main source of this greenhouse gas which contributes to global warming.

Anuchart Palakawong Na Ayudhaya, director of the project's environmental division, assured that similar advanced technology from Germany and elsewhere will be used with the new coal power plants in Krabi and Songkhla.

He admitted the 2,400-megawatt Mae Moh plant had a bad impact when it was built in the late 1970s and early 1980s because of the poor technology at the time. But the new plants will set a good precedent for coal power, he insisted.

"The new plants will have a totally closed system for the transportation of coal from the sea to the power plant and water used in the process will be treated before being released," Mr Anuchart said.

The Egat has set up safety standards for gas emissions that go beyond the bare minimum, he said.