Police are trying to piece together the murder case of a woman whose body was found stuffed in a suitcase in the Mae Klong River in Kanchanaburi two weeks ago. 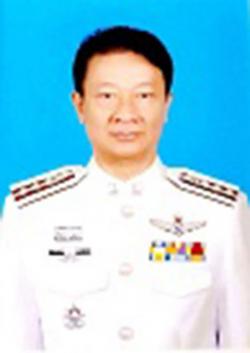 Investigators have so far obtained footage from a security camera that shows a woman, identified as Laksami Manochat, 31, from Si Sa Ket, who worked in Bangkok as a waitress.

In the footage, Laksami is seen walking in the Saphan Khwai area holding hands with a Caucasian male on Nov 1.

Police have questioned witnesses who told them the man was in the weight training and fitness business and worked around Sukhumvit Soi 4, according to a source in the investigation team.

The police began their investigation in Kanchanaburi and worked closely with Provincial Police Region 7.

The team also inspected weight training and fitness centres around Sukhumvit Soi 4 and the nearby Lumpini area, the source said.

A separate group of investigators also hunted for clues where the woman's body was found near an agricultural cooperatives office in Tha Muang district on Nov 6.

The dead woman was wearing a black top, a pair of jeans and high-heeled shoes. She had sustained multiple wounds to her body, including a deep bruise on her forehead.

The killer had filled the suitcase with rocks to weigh it down.

Forensic experts determined she had been dead for three days before her body was discovered and that she suffocated.

Sixty-year-old Sat Manochat confirmed to police that her daughter worked as a waitress at a restaurant in the capital.

Ms Sat confirmed the deceased woman was her daughter and asked officers to bring her justice.

Laksami's last contact with her mother was on Nov 1 when she phoned to say she would transfer money to the family. Ms Sat did not hear from her again.

The family told police that Laksami had been married to a foreigner and lived in the United States before she came back to Thailand.

One media report also says that Laksami has a 12-year-old daughter living with Ms Sat.

However, the investigation team was still short of some vital information, despite having obtained Ms Sat's account.

The police have not yet been able to find the motive behind Laksami's killing.

Officers made another trip to the Mae Klong River.

They conducted a test by dropping a suitcase of a similar size to the one found — containing an animal carcass and rocks to make it the same weight — into the river near the Mae Klong bridge.

They found the case was carried along by the water for about 300 metres, which led forensic police to assume that the killer might have dropped the suitcase into Kaeo Noi river in Dan Makhamtei district in the same province.

The river is a tributary of the Kaeo Yai River in Muang district which merges into the Mae Klong River.

The most important piece of evidence police have is still the CCTV footage.

The man seen with Laksami appears to be bald with a heavy build. He was wearing a T-shirt and shorts with a camouflage pattern, police said.

Police said last week they believed the pair had come to Kanchanaburi in a taxi.

The police source said the taxi driver has already been located and questioned by police.

But the most wanted man is still the foreigner in the footage.

The investigation has been an uphill task, the police source said, because investigators do not know the man's name and have no idea whether he lives in Thailand or has left.

Messi's Argentina go through on penalties after Dutch comeback

LUSAIL, Qatar: Argentina beat the Netherlands 4-3 in a penalty shootout to keep Lionel Messi's World Cup dream alive on Friday after the Dutch had snatched a 2-2 draw from the jaws of defeat in an extraordinary quarter-final.

With the countdown to the May 7 general election next year having begun, the prospect of Pheu Thai forming the next government on its own could become more distant.