The Criminal Court Monday approved 12 days of detention for a former Central Investigation Bureau chief, six other senior police officers and a civilian on charges ranging from lese majeste to violating protected-species laws. 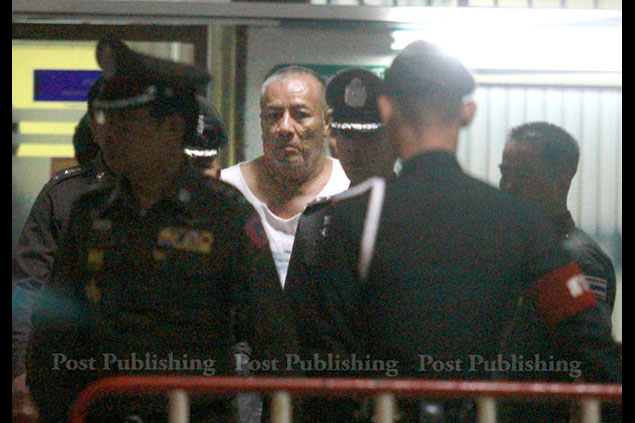 Police asked the court to detain the suspects until Dec 5, as they have to question more than 50 witnesses, and reject their bail requests. The court granted the plea to extend their detention.

The officers were taken to Bangkok Remand Prison while Mrs Sawong was being detained at the Women's Central Prison.

Pol Col Eakkarat Limsangkart, deputy chief of Protection and Crowd Control Division said Pol Lt Gen Pongpat was taken to a police station in Bangkok for further questioning. He declined to specify which station. The ex-CIB chief would be accompanied to the Bangkok Remand Prison later after the questioning, he added.

Police will on Tuesday ask court to renew detentions for Chorb Shinprapha and his wife Tiyaphan - who are alleged to be part of the same ring as the seven officers and charged with facilitating demands for bribes. The couple was arrested on Sunday night along with the officers.

Another civilian involved in the case, Rerngsak Saknarongdech, is still at large, police said.