Defence Minister Prawit Wongsuwon said Monday he could not assure that renewed peace talks between the government and southern insurgent groups will be held by December.

He said lots of preparations are being made ahead of Prime Minister Prayut Chan-ocha's trip to Malaysia next week. 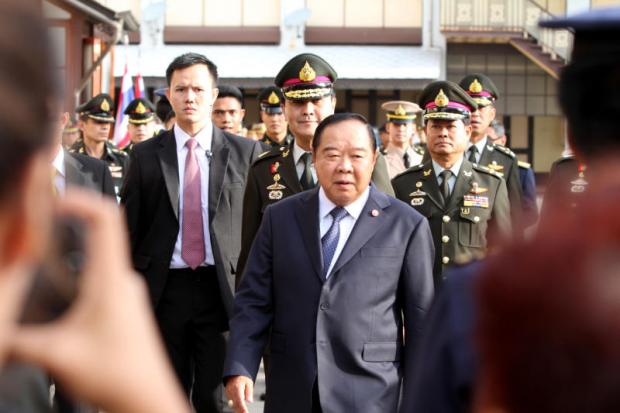 Gen Prawit, who is also deputy prime minister, said Monday the groundwork for the talks is nearing completion but that preparations must be made carefully because they include diverse groups of people.

He said the government needs to boost understanding among locals and has not set a deadline that the process must begin by the end of this year.

Earlier this month Gen Prayut appointed Gen Aksara Kerdpol, chairman of the army's advisory panel and a former army chief-of-staff, as chief negotiator amid rumours that the Malaysian government preferred a civilian to lead the Thai contingent.

Gen Prayut is scheduled to make an official visit to Malaysia on Dec 1 to meet with Malaysian prime minister Najib Razak to formally agree to the peace talks during the one-day trip.

Gen Prayut and Mr Razak are expected to hash out the the timeline of the talks and a place where the talks will be held, Gen Prawit said. During the trip, the government and all the deep South insurgent groups are expected to sign the agreement.

So far, the Barisan Revolusi Nasional and the Patani United Liberation Organisation have said they will sign the agreement, a source said.

Gen Aksara is expected to join Gen Prayut in meetings with Mr Najib.

Gen Prawit admitted he is worried about the threat of retaliation against innocent civilians and urged locals to take precautions, while village defence volunteers have been put on standby in violence-prone areas.

He said most recent violence in the deep South has not be related to the peace talks.

Two ranger volunteers were injured in a bomb attack in Pattani province as they patrolled on motorcycles as part of schoolteacher security detail, police said. The bomb went off on a local road in Kapho district.

The volunteers sustained minor injuries and were taken to a local hospital for treatment, police said.