The Criminal Court on Tuesday approved another 12 days of detention for the sister and brother-in-law of the disgraced Central Investigation Bureau chief, who are accused of helping their “big brother” launder huge bribe payments. 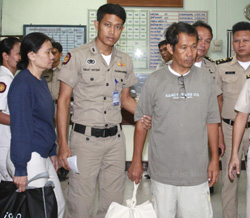 Chorb Shinprapha, 60, and his wife Tiyaphan, 56, are brought to the Criminal Court on Tuesday afternoon as police sought court approval to detain them until Dec 6. The couple are accused of helping a former Central Investigation Bureau chief, Pol Lt Gen Pongpat Chayapan, launder bribe money. (Photo by Thanarak Khunton)

Police asked for approval to further detain them until Dec 6, saying they have to hear from 50 more witnesses, track down illegally obtained assets and await results of fingerprint checks, among others.

In the request seeking the first round of court-ordered dentention, police said former CIB head Pol Lt Gen Pongpat Chayapan allegedly abused his power by demanding bribes from police officers who wanted to be promoted to higher positions.

Pol Lt Gen Pongpat then told his sister, Mrs Tiyaphan, and his brother-in-law, to use the illegal money to buy an assortment of valuable assets, which violated Section 3 of the Anti-Money Laundering Act and Section 60 of the Criminal Code.

Mr Chob and Mrs Tiyaphan denied the charges during the interrogation stage of the police investigation, which has already netted six other senior police officers and two civilians.

Another suspect alleged to be part of Pol Lt Gen Pongpat’s corruption ring, Rerngsak Saknarongdech, is still at large.