Photos by police at Tuesday's press conference show a mind-boggling collection of art and artefacts hoarded by Pol Gen Pongpat and others accused in the multi-billion baht corruption and shakedown operation.

"No matter who is involved, they will be caught. Everything will be based on evidence," said Gen Prayut, insisting police investigators are following the appropriate steps to arrest the suspects, ranging from receiving complaints to substantiating their charges with evidence.

The prime minister made the comments while national police chief Somyot Pumpunmuang told a press conference that more police and individual suspects would be arrested.

Gen Prayut said police reform will be undertaken to improve efficiency, the merit system, and governance.

"If we can eradicate the power allowing the pursuit of vested interests and only keep the power required to administer the country, we will make progress."

"I have a dream that reform of the police will eradicate corruption, illegal acts and abuse of authority," he said.

Among the evidence collected were assets and antiques worth billions of baht belonging to Pol Lt Gen Pongpat.

Both the Anti-Money Laundering Office and the National Anti-Corruption Commission are looking into the gang's alleged illegal activities and Pol Lt Gen Pongpat's unusual wealth.

At a press conference, Pol Gen Somyot said the gang had been collecting bribes for years, adding there would be more arrests and more ill-gotten assets seized.

He said officers had been collecting money from gambling den operators, officers who wanted a promotion, oil smugglers, and the royal institution had been cited to back its demands for bribes.

"I cannot disclose all the details at this stage because police are moving in on more offenders. I will not let this continue and I am introducing a system of merit and good governance at the Central Investigation Bureau," he said.

He said the disgraced CIB chief was the head of the ring and had confessed to all the crimes, which also involved money laundering.

Action against the group followed complaints about demands for bribes and unfair transfers of police under the jurisdiction of Pol Lt Gen Pongpat. Pol Gen Somyot said some of the complaints were sent to him and Gen Prayut.

Asked why police commanders allowed the crimes to occur for years without taking any action, Pol Gen Somyot said he had no idea why that happened.

"I don't know what the police chiefs in the past thought but in my tenure, no matter how 'big' they are, I will not allow it to happen again," he said. "I will set new standards and guidelines for the CIB to base its governance and merit system on."

At the press conference, pictures were shown of valuables seized from 15 locations — 11 houses owned by Pol Lt Gen Pongpat in Bangkok, Nonthaburi and Pathum Thani, one house owned by CIB deputy chief Pol Maj Gen Kowit Wongrungroj and two owned by Pol Col Akkharawut Limrat, former chief of the Crime Suppression Division's Sub-division 1, who recently plunged to his death in an apparent suicide, and one house owned by a civilian.

Some properties owned by Pol Lt Gen Pongpat looked as if they were still under construction, apparently to avoid attention. Some pictures showed safes and vaults that had to be breached to reach the valuables inside.

Gen Somyot confirmed that two suspects, Pol Col Kowit Muangnual, chief of Samut Sakhon's Immigration Police Office, and his wife Sudathip Muangnual have been granted bail since they were only charged with forest encroachment.

Pol Maj Gen Wisut Chatchaidet, chief of Metropolitan Police Sub-division 6, insisted that Pol Col Akkharawut had committed suicide on Nov 20, and that his death had nothing to do with any officers handling the case.

Meanwhile, Anti-Money Laundering Office secretary-general Sihanat Prayoonrat said his office has been coordinating with the Royal Thai Police to access information on the cases to investigate the suspects over money laundering.

He said authorities believe the money gained from bribes involving oil smuggling gangs could be linked to a criminal case against southern businessman Sahachai Chiansoemsin. 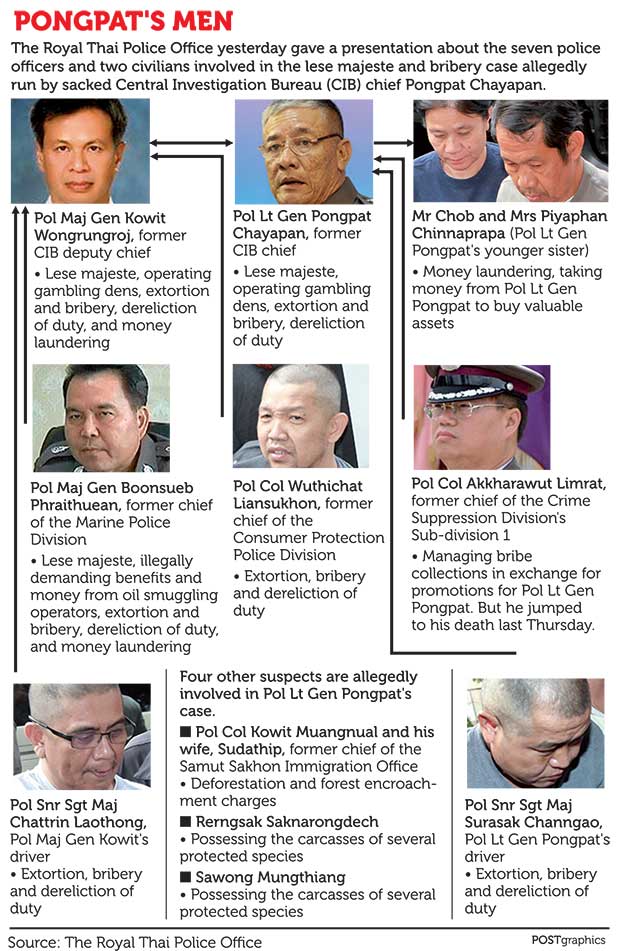