Starting from the 2015 fiscal year onwards, people with disabilities will receive monthly government allowances of 800 baht, an increase of 300 baht under a proposal approved during the weekly cabinet meeting. 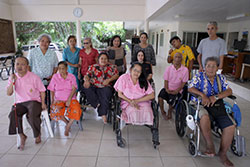 The cabinet on Tuesday approved the Social Development and Human Security's plan to raise the stipend for people with disabilities from 500 baht to 800 baht a month, starting from the 2016 fiscal year starting Oct 1, government spokesman Yongyuth Maiyalarp said after the cabinet meeting.

Under the proposal, provincial centres providing services to people with disabilities will be manned by two officials each, said Mr Yongyuth.

Supacheep Disthes, president of the Disabled People of Thailand,  praised the government for increasing the monthly payouts. Monthly allowance have been frozen at 500 baht for more than 20 years, he noted.