The Appeal Court has overturned a lower court ruling and acquitted 10 activists of charges of storming parliament seven years ago, citing their basic rights and the peaceful intentions of their actions. 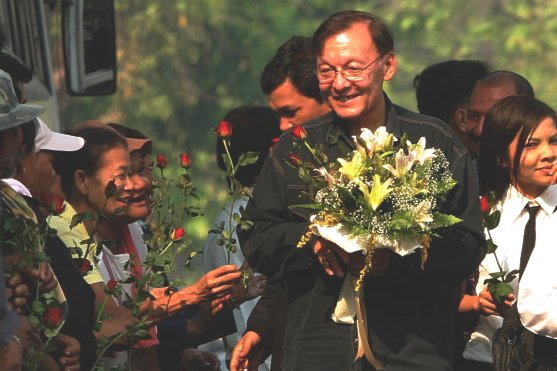 Flashback: Jon Ungphakorn and colleagues involved in the invasion of the parliament grounds in January, 2008, received praise and flowers from supporters of the People's Alliance for Democracy (PAD), the then-powerful yellow shirt movement. (Bangkok Post file photo)

In March last year, the Court of First Instance handed down suspended jail terms to the 10 defendants from eight months to two years.

Fines against the 10 ranged from 6,000 to 9,000 baht on charges of assembling for unlawful purposes and leading people to climb over parliament's fence into the compound on Dec 12, 2007, to protest against the 2006 coup-installed National Legislative Assembly (NLA) passing 11 laws, which the defendants saw as lacking citizens' participation.

The Appeal Court yesterday handed down a remarkable verdict, saying the defendants did not gang up or conspire to make trouble as had been charged.

Even though the defendants entered the premises against the regulations, they did not disturb or cause trouble for the parliament, which was able to continue its meetings, said the Appeal Court.

The defendants had a clear intention to show their disagreements with the NLA passing laws as the election date was already scheduled for Dec 23, 2007.

"They held a peaceful protest but were stopped. They then climbed into the building while some remained outside. The protesters and defendants clearly wanted the NLA to suspend the meetings," the Appeal Court ruling said.

"They did not intend to occupy or intrude into the parliament. It's their basic right to express their disagreement without causing any damage to the parliament or disrupting the operations of the body," said the Appeal Court.

Ms Supinya burst into tears of joy after the ruling was read saying that it was both a surprise and a relief.

"It doesn't only restore our liberty but the clear and progressive verdict recognises our belief that laws should not be passed unconstitutionally by the NLA," Ms Supinya said.

Mr Jon said the verdict was a triumph of freedom and liberty for those who wanted to express peaceful opposition against illegitimate acts.

PARIS - The discovery of dozens of beakers and bowls in a mummification workshop has helped reveal how ancient Egyptians embalmed their dead, with some "surprising" ingredients imported from as far as Southeast Asia, a study said Wednesday.