City Hall plans to siphon water from a pond in the Makkasan area after thousands of fish were found dead. 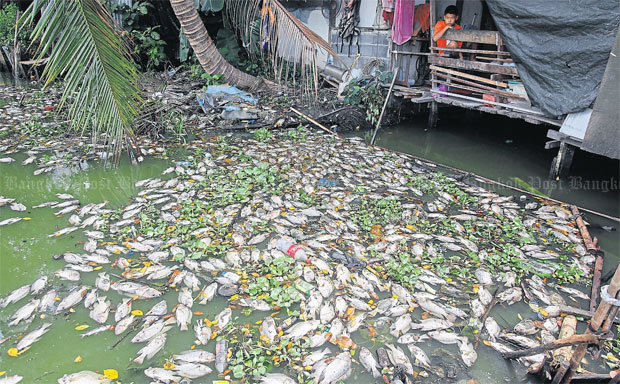 Dead fish, mostly tilapia, float on the surface of Burachat Chaiyakan pond in the Makkasan area. City Hall officials say an inspection of the pond following complaints by locals found the dissolved oxygen level in the water was zero. PATTARAPONG CHATPATTARASILL

Mr Kangwan said officials discovered the dissolved oxygen level in the pond water had fallen to zero. He said the fish had been dead for about three days.

The officials inspected the pond after a group of residents complained.

The pond is located in property managed by the State Railway of Thailand but the Bangkok Metropolitan Administration decided to take action after receiving the complaints.

Mr Kangwan said City Hall would drain the water out of the pond and then refill it with water from the nearby Khlong Saen Saep.

The deputy chief rejected rumours that some people had poisoned the fish so they could sell them.

Nonn Panitwong, a water ecology adviser at Green World Foundation, said the fish deaths were likely caused by low dissolved oxygen levels, and this could be seen by the dark colour of the water.

He said the pond had not been siphoned after the rainy season and waste under water became more concentrated, resulting in lower levels of dissolved oxygen.

Mr Nonn said tilapia are known to be one of the toughest species of fish and can endure low levels of dissolved oxygen.

The deaths of the tilapia indicated the poor condition of the water, he said.

To completely clean the pond, he said, the muddy soil at the bottom of the pond had to be removed and oxygen had to be added back into the water.

Hyacinth can also help absorb waste in water, he said, adding that littering also had to be prohibited.