Threatened Thap Lan chief Taywin Meesap has thrown in the towel in his fight to end resort encroachment in the popular national park by seeking transfer to a new post in Kanchanaburi. Thap Lan park chief Taywin Meesap shows an order on Wednesday for a resort in Wang Nam Khieo district in Nakhon Ratchasima province to be demolished. He later asks for a transfer. (Photo by Manit Sanubboon)

The transfer order was signed by National Parks, Wildlife and Plant Conservation Department director-general Niphon Chotiban on Thursday and took effect immediately. It involved four officials but the highlight was on Mr Taywin.

Mr Taywin had requested a transfer and the department ordered him to swap positions with Viroj Rojanachinda at Khao Laem National Park in Kanchanaburi province, the department chief said.

He had cleared all hurdles to pave the way for his successor, Mr Niphon added.

Mr Taywin's decision followed reports that his life was being threatened after attempts to move illegally built resorts out of Thap Lan.

Mr Taywin told FM106 news earlier on Thursday local police and friends had warned him of imminent danger as gunmen had been hired to kill him. Two masterminds were possible, he told the radio station, but did not elaborate. 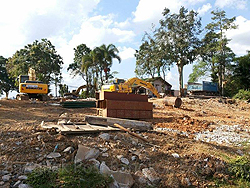 A resort in Wang Nam Khieo district in Nakhon Ratchasima province is being flatten for land encroachment. (Photo by Manit Sanubboon)

Thap Lan has handled 434 cases of land encroachment in the park, 314 of them involving resorts and holiday homes for the rich and the rest about land encroachment by tapioca farmers. Most resorts are in Wang Nam Khieo district in Nakhon Ratchasima province and others are in Na Di district in Prachin Buri province.

The park has ordered 23 resorts to be demolished with 291 places to follow.

Some owners like the one at popular Ban Pa Ngam in Na Di have agreed to raze their places by themselves and keep some of the assets for use later, rather than have park officials bring in the bulldozers.

"What I'm doing is nothing personal. It's not revenge. I'm only doing my job," Mr Taywin told the radio station.

He aired his frustration after news that park authorities had received tepid cooperation from local and state agencies. Some had even tried to help the illegal resorts and holiday homes, he said on Matichon online.

The crackdown campaign was now concentrating on resorts in Wang Nam Khiew, dubbed the freshest air in the country due to its green location and rich with ozone.

Park officials, police and soldiers put up signs at some more resorts at Wang Nam Khiew on Wednesday ordering them to be torn down under Section 22 of the National Park Act which gives authorities power to flatten all illegal structures built in national parks.

They had tried to enter the area covering two tambons before but were blocked by local administration officials and locals.

This time he encountered another problem as Wang Nam Khieo district chief Pairat Limsakul lobbied the park authorities in a meeting on Thursday to temporarily put off the campaign until March citing the damage to tourism in the district as the New Year holidays are looming.

Mr Taywin said he had asked the district to formally send its request to the department and he would leave the decision to the agency, according to Matichon.

He said before the transfer order was announced that his next major target will be Ban Tayle Mok in Na Di on Dec 11. A demolition sign will be put up there, he said.

Thousands of protesters turn Lat Phrao intersection into a picnic ground as they deliver a serious message against military coups.

Two weeks in a five-star hotel in Pattaya might not sound bad, except when you can't go outside or interact with anyone other than health workers, says Thai returnee Emmy Sasipornkarn.

Malaysia in vaccine pact with Pfizer

KUALA LUMPUR: Malaysia on Friday signed an agreement with Pfizer Inc to obtain its Covid-19 vaccine for 20% of the population as it battles a resurgence of coronavirus infections.