Five more suspects face arrest warrants on a number of criminal charges including lese majeste in connection with the case of the former Central Investigation Bureau (CIB) chief. 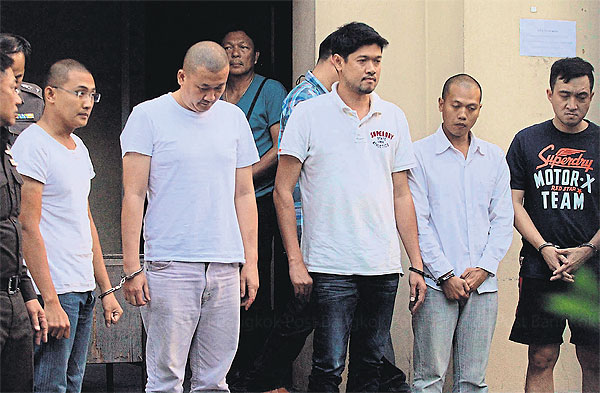 Three suspects are civilians and two are soldiers, both of whom have been detained.

The five new suspects are accused of the same crimes of citing the monarchy to obtain benefits and money from others, illegally collecting debts, illegally detaining people, and extortion.

According to police the five suspects abducted a creditor in June to force him to lower their debts from 100 million baht to 20 million baht.

Meanwhile, three high-level marine police face transfers to inactive posts after a preliminary investigation found they were involved in a fresh bribe payment scandal in the deep South.

The officials are accused of receiving bribes paid by a major oil smuggling ring in the South, said police spokesman Prawut Thawornsiri yesterday.

National police chief Pol Gen Somyot Pumpunmuang revealed on Thursday that police are investigating close to 50 more law enforcement officials whose names appear on a bribe payment record seized from a house owned by a southern businessman suspected of operating a major oil-smuggling ring in the South.

Sahachai "Sia Jo" Chiansoemsi, a southern businessman who is wanted on an arrest warrant for oil smuggling and is still at large, allegedly paid huge amounts of bribes to several officials including Pol Lt Gen Pongpat's network.

About one billion baht in cash, valuables and assets totalling 10 billion baht were found and seized along with the arrest of Pol Lt Gen Pongpat.

An undisclosed amount of money belonging to Pol Lt Gen Pongpat had already been taken out of the country and invested abroad, said Pol Lt Col Prawut.

The Crime Suppression Division which is under the CIB, meanwhile, decided to dissolve its 16 ad hoc operation centres, saying the move was part of its efforts to thwart bribery activities at the CSD, said Col Akaradech Pimolsri, the acting CSD chief.

Only a centre set up specifically to suppress the problems of hitmen and influential figures remains.

Meanwhile, the Fine Arts Department yesterday confirmed that a number of antiques, including Buddha images and figures of deities which were seized from the police suspects' houses are centuries old.

The department's experts will need about two months to examine and authenticate all of the artefacts, director-general Borvornvate Rungrujee said at a news conference yesterday.

Most of the antiques were metal and wooden Buddha statues dating from the 23rd to 25th Buddhist centuries. They exhibit delicate craftsmanship following Khmer, Chinese, Indian, Burmese and Western styles.

If it proves to be genuine, it could be worth several million baht and would not belong to Thailand, he said.

The figure is an example of the Khmer Phnom Da art dating from the 12th Buddhist century, he said.

Over the next two months, the Fine Arts Department will try to authenticate almost 20,000 works of art seized from Pol Lt Gen Pongpat's houses and see if any of them were prohibited from being owned by individuals.

People who own such such artefacts illegally are liable to a jail term of up to five years and/or a fine of up to 500,000 baht, the Fine Arts chief said.

Three people have already claimed to be the real owners of some of the Buddha statues and carved ivory tusks, Mr Borvornrvate said.