Men are accused of abducting creditor

Two more suspects from the alleged criminal network of former Central Investigation Bureau (CIB) chief Pongpat Chayapan have been arrested, bringing the total of those apprehended to 19. 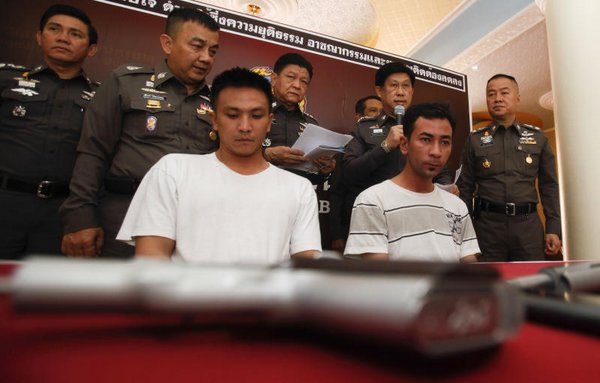 Natthanan Thanawech and Chalach Phothirach, who are civilians, turned themselves in to Metropolitan Police Division 5 officers at a house in Soi Suthipong 4 in Din Daeng district late on Saturday night.

The pair were among five suspects wanted on arrest warrants issued by a court on Friday for citing the monarchy to obtain benefits and money from others, illegally collecting debts, illegally detaining people and extortion.

The group allegedly tried to abduct businessman and creditor Bandit Chotwitthayakul at his condominium in Bangkok's Bang Kholaem district on June 23 to force him to lower a 120 million baht debt owed by a borrower to 20 million baht.

The borrower has been identified as Nopporn Suppipat who allegedly hired the network to "negotiate" his debt cuts. The suspects would receive 10% of the cut amounts, police said.

An argument erupted during the abduction attempt, prompting police to intervene and take all those involved to settle the dispute at Wat Phraya Krai police station.

The suspects and Mr Bandit later left the station and tried to negotiate the debt at a restaurant in Buddha Monthon district of Nakhon Pathom.

Mr Chalach had said he was Mr Chakan's driver and was hired for 4,000 baht to invite Mr Bandit for talks, Pol Lt Gen Prawut said. The suspect said he was not armed during the incident, he said.

Pol Lt Gen Prawut said both Mr Natthanan and Mr Chalach were in the illegal debt collection gang. "Mr Chalach acted as a driver, while Mr Natthanan delivered documents by citing the monarchy."

The suspects, however, denied citing the monarchy to ask for the cuts, he said.

Police on Sunday inspected the restaurant where the debt talks were held.

The suspects threatened the victim by citing the royal institution, but the talks eventually failed, Pol Col Kiatnarong said.

A total of 19 suspects linked to the alleged network of Pol Lt Gen Pongpat have been nabbed, two of whom were granted bail during the probe. Three other suspects are still on the run, police said.

Investigators have called in six officers attached to the Crime Suppression Division (CSD) who were thought to be tied to Pol Lt Gen Pongpat's network. Five were cleared, but the one remaining, Pol Lt Col Songrak Kunsri, deputy chief of CSD sub-division 6, can't be found.

Pol Lt Col Songrak was said to have close ties with Pol Lt Gen Pongpat. He failed to report to his superior after returning from a work visit to the United States.

The officer could not be reached when police sought him for more information. If he fails to turn up in 15 days, he will be dismissed, Pol Lt Gen Prawut said.