Originally set to take effect today, the new taxi fares were delayed because 85% of taxi cabs first have to pass inspections of their condition at the Land Transport Department, ACM Prajin said. He said the increase also was postponed because Deputy Prime Minister Pridiyathorn Devakula had yet to approve the new fares. 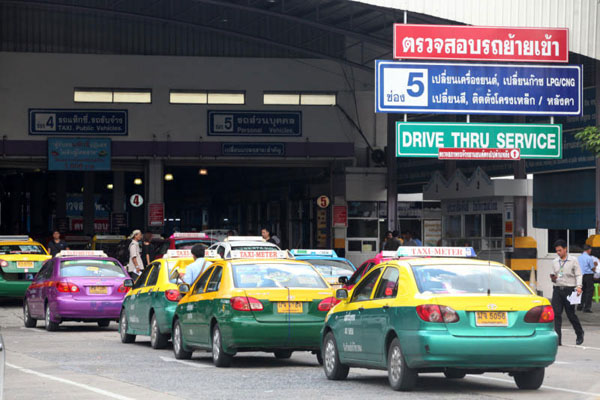 Taxis queue up for conditional checks at the Land Transport Department in Bangkok. (Photo by Thiti Wannamontha)

"I cannot tell if the new fare rate can start within this year but I told the Land Transport Department to speed up the checks for the sake of fairness to taxi drivers," the transport minister said. Taxi fares have not increased in 13 years.

Land Transport chief Teerapong Rodprasert said about 25% of 80,000 taxis had passed condition checks and his department would accelerate inspections.

As for Uber, which competes directly with regulated taxis and limousine operators, ACM Prajin said the Department of Land Transport would try to persuade operator Uber Technologies Corp to end its operations in Thailand because it uses privately-registered cars, improperly licensed drivers and no fare meters.

"If we do not receive cooperation, we may have to decisively enforce the law to prevent copycats," ACM Prajin said.

Bangkok already is served by two other Uber-like companies: GrabTaxi and Easy Taxi, which also take bookings via a smartphone app. However, both services use registered metered cabs and regulated fares. However, each also adds a booking surcharge. GrabTaxi also operates in Pattaya.

The department on Friday declared Uber illegal in Thailand, claiming its vehicles are improperly registered, charge fares not in line with regulated rates, utilize drivers without the proper licenses and discriminate against customers without credit cards.

Mr Teerapong Monday said Uber has not accepted an invitation to have a representative negotiate with his department. In addition, department personnel now were fining drivers, he said. One Uber driver was stopped Monday and fined 2,000 baht. Mr Teerapong noted.

The department said last week fines could total up to 4,000 baht each time a driver is stopped.

In a statement released Saturday, Uber said the company "respects and welcomes the opportunity to engage with the relevant authorities to help them better understand the value" that the company brings to the transportation sector.

Uber executives said they were not prepared, for now, to publicly dissect the Department of Land Transport's list of allegations, but asserted there were "a number of things that are not totally accurate."

For example, all Uber vehicles operating in Phuket and the vast majority of those in Bangkok are, in fact, properly registered limousine cars with properly licensed drivers, a company source told the Bangkok Post.

The strongest typhoon to hit the Philippines this year left at least six people dead, authorities said Monday, after heavy rain and fierce winds battered the country's most populous island.