Two Myanmar men accused of the brutal slayings of a pair of British backpackers on Koh Tao in September could be indicted as soon as Tuesday, after police submitted additional evidence requested by prosecutors. 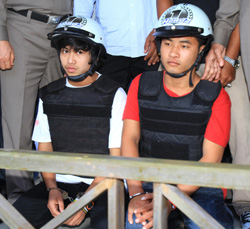 Zaw Lin (left) and Wai Phyo take part in a re-enactment of the murder of British tourists Hannah Witheridge, 23, and David Miller, 24, on the island of Koh Tao in Surat Thani on Oct 3.

The committee will meet Tuesday to review the new evidence and, if prosecutors deem it complete, the indictment order could be issued in the afternoon. If not, the indictment likely would come down later this week, Mr Thawatchai said.

The two Myanmar men face possible death sentences for the Sept 15 slayings of the two Britons on Koh Tao's Sairee Beach. They also are accused of raping Witheridge, illegal entry and murder to retain benefits resulting from other crimes.

The men initially confessed to the charges, but later retracted their confessions, saying they had been tortured and threatened with death if they didn't admit to the crimes.

If they aren't indicted tomorrow, prosecutors will need to request from the court a sixth extension of their detention. Both suspects were denied bail last week.