National police chief Somyot Pumpunmuang has offered a one million baht reward for anyone who gives the police information that leads to the arrest of the alleged oil-smuggling ring leader in the South, said police spokesman Prawut Thawornsiri.

Sahachai "Sia Jo" Chiansoemsi, a fugitive Narathiwat businessman convicted of document forgery and wanted for a string of crimes, including bribery in the Pongpat police scandal. These photos were taken earlier this year at Sia Jo's lumberyard (left) and in conversation with a DSI officer near his home in the South. (Bangkok Post file photos)

Pol Lt Gen Prawut said the amount would be paid to anyone who can help the police capture the fugitive convict Sahachai "Sia Jo" Chiansoemsi, a well-known southern businessman.

Sahachai escaped from detention with the help of a police officer, shortly after he was sentenced to one year and nine months in prison for forging documents at the Pattani Provincial Court on Oct 9. He also faces an arrest warrant for oil smuggling. 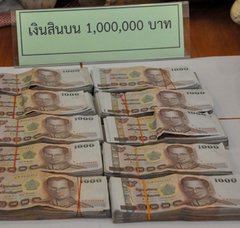 Pol Lt Col Songrak failed to report to his superior as requested and disappeared after returning from a work visit to the United States.

Police and forest officials raided an antique shop on Chaeng Watthana Road in Pakkret, Nonthaburi on Monday, and found 2,774 planks of wood in its warehouse as well as a number of antiques.

Police are examining the objects as they suspect the objects are linked to Sawong Mungthieng, one of the suspects in Pol Lt Gen Pongpat's group.

Meanwhile, one more suspect allegedly linked to Pol Lt Gen Pongpat turned himself in to police Monday, police said. Witthaya Theskhunthot brings the total number of suspects in custody to 20. He is among five suspects wanted on several criminal charges including citing the monarchy to obtain benefits and money from others, illegally collecting debts, illegally detaining people and extortion. On Saturday night, two other members of the group — Natthanan Thanawech and Chalach Phothirach — turned themselves in.

Two soldiers wanted by police, Sgt Nathakorn Yasri and Sgt Thiraphong Chochampi, on Monday failed to turn up at the Metropolitan Police Bureau despite having earlier promised to turn themselves in. They were reported to have been in custody at their military units.

The National Anti-Corruption Commission (NACC) said it will check whether the state officials' declared assets correspond with those investigated by the police, NACC chairman Panthep Klanarongran said.