The Fine Arts Department has confirmed that many artefacts seized from disgraced former Central Investigation Bureau chief Pongpat Chayapan and his criminal associates are genuine, with some dating back as far as 1,400 years. 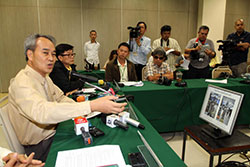 Most of the antiquities seized from Pol Lt Gen Pongpat and his network were made of sandstone.

‘’The results of initial examinations show at least 10 Khmer artfefacts are genuine. In addition, there are more than 30 antique Buddha statues from the Ayutthaya and Rattanakosin periods. Some of these statues are more than 300 years old,’’ said Mr Bovornvet.

Many of the artefacts seized from the secret houses owned by the  former CIB chief were made in Thailand and imported from China, India and from European countries.

The department will display photographs and details all seized items at its website so people could check on them. If some items were found to be stolen, owners could present proof and ask that they be further examined at all 44 national museums across the county, or at the department head office, said Mr Bovornvet.

The seized items will be sorted and later registered. After that, the department will work with the military and ask that  the ancient artefacts be kept at the department’s warehouse in Pathum Thani.

Sahaphum Phumthitirat director of the Office of National Museum was also present at the press conference.