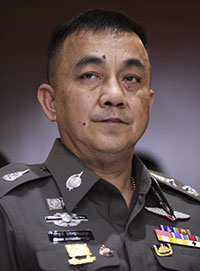 Mr Preecha had allegedly hired the members of the former CIB chief’s gang who were caught earlier to kidnap a debtor from his house in Phra Khanong area on March 20 this year, and force him to repay a 37 million baht debt.

Mr Paichet had acted as a coordinator of the gang, Thai media reported.

Metropolitan Police Bureau commander Pol Lt Gen Sriwara Rangsiphramnakul said on Wednesday three police teams have been set up to hunt down businessman Nopporn Suppipat, wanted on a number of charges including lese majeste in connection with the case against Pol Lt Gen Pongpat.

Mr Nopporn, 43, the founder and chairman of the executive committee of Wind Energy Holding Co (WEH), allegedly hired Natthanan Thanawech and Chalach Phothirach and three other men to kidnap Bandit Chotwitthayakul, a businessman, from his condominium in Bangkok’s Bang Kholaem district on June 23 and force him to drastically lower a 120 million baht debt owed by Mr Nopporn to 20 million baht.

Mr Nopporn was ranked 31st on the list of the country’s wealthiest people this year by Forbes magazine.

Mr Natthanan and Mr Chalach turned themselves in to police on Saturday. Later, three others, one civilian and two soldiers, also surrendered to police. The five suspects allegedly belong to the same gang hired by Mr Preecha to strongarm repayment of the debt.

Pol Lt Gen Sriwara said Mr Nopporn had fled the country in the early morning of Dec 1, one day before the military court approved an arrest warrant for his arrest as requested by police.

The businessman had fled to Cambodia via the Pakkad border checkpoint in Chanthaburi’s Pong Nam Ron district, the Bangkok police chief said.