A video clip showing a nine-year old girl driving a car to school posted on a Facebook page has drawn widespread criticism of the parents.

The clip, “Real story, dad allows kid to drive to school (1/12/57)” was posted on a popular You Like Clip Ded page on Tuesday as a follow up from another clip which shows a girl driving in a red car.

The page notifies its followers that the clip was introduced by @Wiz Suwit.

As of 4pm Wednesday, the clip had received 962,000 views with 83,295 likes and 12,301 shares. It drew loads of comment, most of which denounce the illegality of allowing the underage girl to drive. Some people, however, commented that the girl was doing well.

Most of the comments concerned safety, not for the girl herself but for other drivers.

Chanji VinzDayz wrote: "This is certainly illegal as she does not have a driving licence, or the maturity, and unlikely to make a proper decision in an emergency. If there is an accident, what will the other person do? It is like suicide." 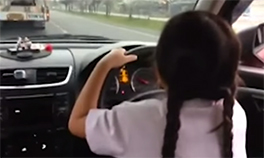 A nine-year-old girl drives a car to school in Surat Thani.

Louis Lunthom wrote that he respects children who can do better than others of the same age, but not in this case because it may be dangerous to others, and even to  the girl who has not been in dangerous situations like being cut off or overtaken. He asked whether this little girl would have the reactions or decision-making abillity to avoid danger.

According to Thairath online, the girl’s father Yongyuth Mankaprathum asked the public not to condemn his family.

He said the girl started driving when she was seven years old. Normally, she drives the eight kilometres to her school in Surat Thani’s Muang district.

The longest trip was from Surat Thani to Phuket when she drove a Land Rover without an accident, her father said.

In the clip, which seems to be taken from the back passenger seat, the father said he also allowed his daughter to drive alone while he followed in another car behind her.

He admitted that it is illegal and said he will not allow her to drive again.

Mr Yongyuth said the girl was upset and asked why she could not continue to drive as she had never caused an accident, so he had to explain that it is the law.

Pol Col Suwat Suksri, superintendent of Surat Thani police station, has instructed officers to order Mr Yongyuth to report in and pay a 2,000 baht fine. There is no punishment clause for underage drivers, but her parents will be warned, he said.