'Campers' sleep over at Siriraj Hospital

A royal medical team asked His Majesty the King to cancel plans for a public audience as part of the monarch's birthday celebrations on Friday. 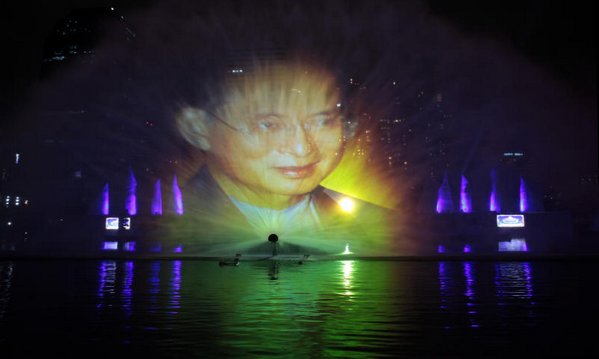 An image of His Majesty is projected on water spray as part of the Mahajanaka the Phenomenon Live Show organised by the Bangkok Metropolitan Administration. The event is being held to celebrate the King's birthday and takes place at Benjakiti Park between 7pm and 9pm until Tuesday. (Photo by Pawat Laopaisarntaksin)

Hundreds of well-wishers wearing yellow shirts had been camping out at Siriraj Hospital and on nearby roads since Thursday to try to catch a glimpse of His Majesty, who was set to make a short trip to the Grand Palace to celebrate his 87th birthday.

An announcement from the Royal Household Bureau confirmed the request.

"After an eventing medical examination, His Majesty's doctors have requested that the King not leave the hospital today for an audience at the Amarin Vinitchai Hall," it said.

Both His Majesty and Her Majesty the Queen were to hold the audience, and millions awaited the event, thousands at the sites, and others at home on the national holiday.


Many of the well-wishers left their homes for the hospital Thursday after an official announcement said the King and Queen are in good health and will grant an audience at the Grand Palace today.

Udom Kachintorn, dean of the Medicine Faculty at Siriraj Hospital, Mahidol University, said the hospital has provided space for people coming to see His Majesty. 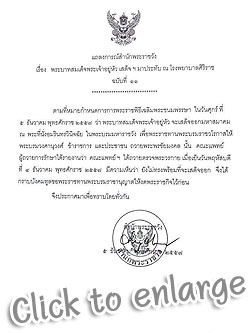 “The presence of Thais turning up to welcome His Majesty will greatly boost His Majesty's morale,” Dr Udom said.

The dean added that the King will enjoy an even more auspicious birthday next year, when he turns 88. Traditional Chinese beliefs regard the number 88 as a lucky number, which signifies happiness, cheerfulness and greatness.

Prasert Mapacha, 70, took a free train from her home in Prachin Buri and arrived in Bangkok at 9am Thursday, before taking a city bus to Siriraj Hospital.

She brought a national flag, clothes, a blanket and food with her and planned to sleep overnight on a bench somewhere in the hospital grounds.

“I have camped out overnight on several occasions to see the King and the royal family, but have never seen him clearly and up close because there were always large crowds of people,” she said.

“This time, I do not intend to miss it. I will wake up early to get the best spot,” she added, saying she might not be able to see the King again because of her advancing years.

Ms Prasert said His Majesty gave her family a five-rai plot of land in Prachin Buri many years ago.

“I am here to express my deepest gratitude to the King and offer him my best wishes on his birthday,” she said.

Samree Sirijan, 69, said she and her son drove from their home in Ubon Ratchathani and were to sleep in the hospital's grounds to guarantee a glimpse of the King.

“I plan to stay here from Thursday to Saturday in order to pray that he has a long life,” she said. “I come and join the celebrations every year and don't ever want to miss them. I will come and join in until I die.”

Ms Samree said she wished that she were strong enough so she could walk from her home province to Bangkok to celebrate the King's birthday. She said she was inspired by her uncle Sa-ing Hanprakone who once walked from his home in Phrae to Siriraj Hospital to extend his birthday wishes to the King.

Sutthirat Supathepchai, 57, said she caught a glimpse of the King and Queen many years ago.

“I've come to the hospital every evening since Nov 28 to wish the King a happy birthday. Today, I've decided to stay overnight to get the best spot to see the royal family,” she said.

“The people of the United States join me in sending heartfelt congratulations to Your Majesty on your birthday this Dec 5. The American people are committed to our enduring partnership and friendship with the Thai people.

“Grounded on the firm foundation of our shared history, I look forward to continuing our friendship in the years to come,” Mr Obama said in his message released by the US embassy in Bangkok.

Earlier, the Royal Household Bureau issued a schedule for ceremonies to mark the King's birthday.

It said that at 10.30am Friday, Their Majesties the King and Queen would make an appearance at Amarin Winitchai Throne Hall inside the Grand Palace along with other members of the royal family.

His Majesty was to give a speech. Afterwards, Their Majesties would leave the Grand Palace in a royal motorcade and return to Siriraj Hospital.

Privy councillors, cabinet ministers, members of the judiciary, civil servants, military leaders and foreign dignitaries were to be present.

Those ceremonies were cancelled Friday morning, on medical advice. But other parts of the celebrations went ahead.

Servicemen from the army, the navy and the air force will fire a 21-gun salute as the King makes his appearance.

Pol Lt Gen Prawut Thawornsiri, spokesman for the Royal Thai Police, said roads around Sanam Luang will be closed to traffic from 4am this morning until the ceremonies end. 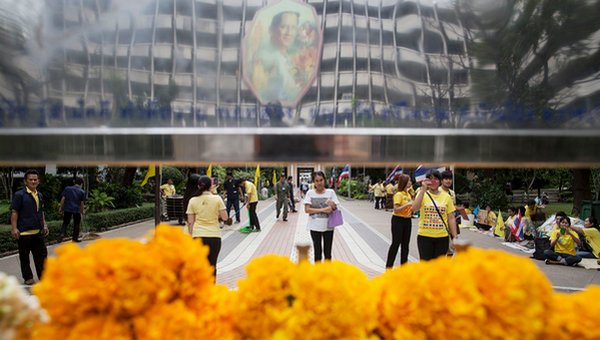 Subjects began camping out at Siriraj Hospital on Thursday, hoping to catch a glimpse of His Majesty the King, who was scheduled to travel to the Grand Palace for a mid-morning audience on his 87th birthday on Friday. (Reuters photo)