His Majesty the King is recovering well from his illness and his condition is not serious, a royal physician said on Friday. 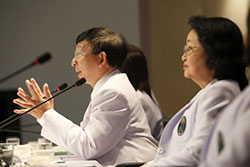 Dr Udom Kachintorn, dean of the faculty of medicine  at Siriraj Hospital, Mahidol University, said there is nothing unusual regarding the King’s health.

His Majesty is recovering after treatment for a fever and inflammation of the large intestine.

He was given antibiotics for the inflammation. Doctors stopped the medication almost two weeks ago. The King’s condition has gradually improved and he is now recovering, Dr Udom said.

Doctors had examined him on on Thursday night to ascertain his physical readiness ahead of his scheduled public appearance at the Amarin Vinitchai Hall at the Grand Palace on Friday.

His Majesty was determined to appear for the scheduled audience at 10.30am, to allow well-wishers to give him birthday greetings.

However, the team of physicians agreed the King should not  leave the hospital at this time, said Dr Udom.

He said the people should not to be worried as His Majesty’s condition is not serious. Taking further rest will help him regain strength and fully recover.

A huge crowd of well-wishers have gathered at Siriraj Hospital in a show of support for His Majesty.

The  Royal Household Bureau on Friday announced the temporary closure of the get-well books for well-wishers to sign at Siriraj’s 100th Year Building until Sunday.  People could still sign similar books at  the Grand Palace’s Sahathai Samakhom Pavillion from 8.30am to 4.30pm from Friday to Sunday.

The get-well books will be open to the public again at Siriraj Hospital from Monday onward. 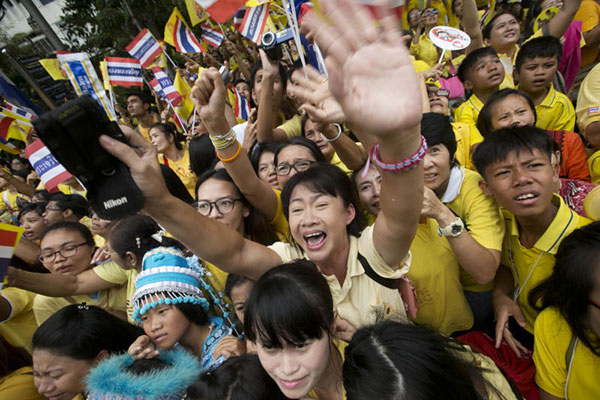 A crowd of well-wishers remain outside Siriraj Hospital in a show of support for their beloved monarch. (Photo by Seksan Rojanamethakul)