Police back probe as mogul hits out
Thailand
General

Police back probe as mogul hits out

Police on Sunday defended their handling of an investigation into the alleged extortion network of the sacked former Central Investigation Bureau chief Pongpat Chayapan, after a billionaire suspect claimed he was a victim of an extortion racket.

Pol Col Kiatnarong Chalermsuk, superintendent of Wat Phrayakrai police station, insisted the criminal charges against fugitive billionaire Nopporn "Nick" Suppipat were based on solid evidence; otherwise, the military court would not have approved a warrant for his arrest.

He said the police were handling the investigation in a straightforward manner and urged the businessman to contact police and fight the charges to clear his name. 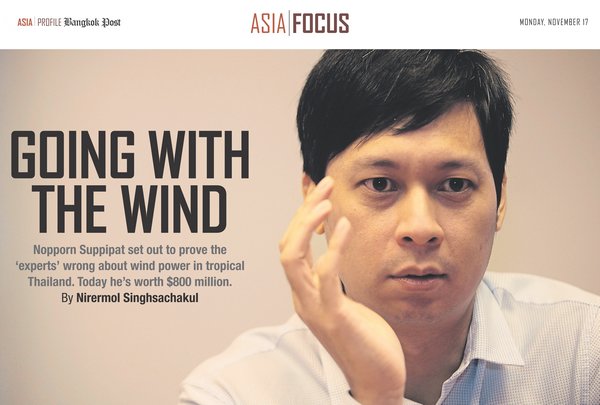 Mr Nopporn and his work to boost wind energy in the region were the subjects of a profile in Asia Focus just three weeks ago - and two weeks before his business and personal life blew up in a rash of charges that he is deeply involved in one of the worst government scandals ever uncovered. (Photo of Mr Nopporn by Pawat Laopaisarntaksin)

Pol Col Kiatnarong said police interviewed Mr Nopporn only once, and no charges were pressed against him at that time. When Mr Nopporn was scheduled to meet police again, he fled.

Mr Nopporn gave an interview via telephone to a foreign news agency and sent an open letter to the Thai media Sunday putting his case. Pol Col Kiatnarong said the information passed on by Mr Nopporn was not true.

In the letter, the founder and chairman of the executive committee of Wind Energy Holding Co (WEH) claimed the police have concealed evidence and pressed false charges against him.

He said he has fled overseas because he is concerned about his safety. He is not sure that if he turns himself in to fight the charges he will be granted bail, and he is afraid of "being silenced" in prison.

Mr Nopporn is wanted on a number of charges, including lese majeste, extortion and intimidation for his alleged connection with the Pol Lt Gen Pongpat network.

Police allege Mr Nopporn hired Natthanan Thanawech and Chalach Phothirach and three other men linked to the network to kidnap a businessman, Bandit Chotwitthayakul, to whom he owned money. 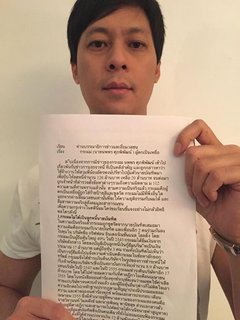 Mr Nopporn shows his "letter to the media'" in a Facebook photo posted Sunday..

In his letter to the media, Mr Nopporn said he is the "victim" of extortion and gave details of what he claimed happened.

He said he gave a statement to Wat Phrayakrai police on Nov 29. During questioning, police asked if he knew Cdr Parinya Rakwathin, managing director of the Chao Phraya Express Boat Co, another suspect who turned himself in to police on Saturday and faced similar charges.

Mr Nopporn said he was reluctant to give information because of the police scandal. He contacted police the next day to offer further statements, but police fobbed him off.

Worried something was amiss, he fled.

He questioned why police told the media that Mr Bandit was his debtor, saying police knew well that was not true.

Mr Nopporn said Mr Bandit, himself and two others set up a company called Griffon International Holding in 2000 in which he held a 40% stake.

He later borrowed 17 million baht from the company, but Mr Bandit and the two others accused him of embezzlement and filed a lawsuit against him.

In 2004, he paid part of the debt to the company and settled the balance in 2012. A debt settlement agreement was signed in April that year. All except Mr Bandit agreed to withdraw the lawsuit.

When business improved this year, Mr Nopporn says he offered Mr Bandit 20 million baht in exchange for dropping the lawsuit.

To ensure the settlement, he came to Cdr Parinya for advice, and the former naval officer offered to find an influential military officer to be debt negotiator.

Cdr Parinya later allegedly claimed the debt negotiator requested 30 million baht in service fees. Mr Nopporn said he agreed to pay 5 million baht up front and the rest after the deal was settled.

Instead of doing what was agreed, Cdr Parinya allegedly contacted the criminal group to abduct Mr Bandit and force him to demand only 20 million baht from Mr Nopporn and released him. Upset by the incident, Mr Bandit later demanded he pay 150 million baht.

Weary of the affair, Mr Nopporn said he agreed to pay 120 million baht to settle the case. Mr Bandit agreed to the sum and the debt settlement document was signed on July 10 at the Supreme Court.

Mr Nopporn said Cdr Parinya demanded 25 million baht from him, and he agreed to pay out of concerns for his safety.

The first batch of 1.5 million Pfizer vaccine doses donated by the US is scheduled to arrive in Thailand on Friday under a US government (USG) Covid-19 assistance programme. Michael Heath, Chargé d'Affaires of the US Embassy in Thailand, answered written questions by ANUCHA CHAROENPO, asking him about US support for Covid-19 vaccine distribution.