The driver was killed and 15 passengers slightly injured when an air-conditioned inter-provincial bus travelling from Krabi to Bangkok ran into the back of a parked refrigerated truck in Phetchaburi province in the early hours of Tuesday. 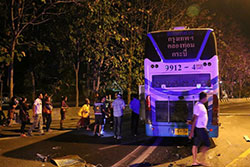 Passengers mill around the wrecked air- conditioned bus after it crashed into  the rear of a refrigerated truck in Phetchaburi, killing the bus driver, early Tuesday. (Post Today photo)

An air-conditioned passenger bus belonging to Lignite Tour Co was found blocking traffic in the U-turn lane on the Bangkok-bound side of the road, he said. The front end of the bus was severely damaged.

One man, later identified as the driver  Angkharn Borna, was found dead in the bus and 15 passengers were slightly injured.  The injured were rushed to a nearby hospital and all were discharged after treatment for minor injuries and bruising.

Near the bus was a 10-wheel refrigerated truck with a Nakhon Pathom licence plate. The rear of the truck was damaged and the driver had fled. A roadside power pole was knocked down in the accident.

Peerapol Sutthithana, 24, the bus conductor, told police there were 47 passengers on the bus,  travelling from Krabi to Bangkok. He did not know how the crash occurred as he and most passengers were asleep.

Police suspected the truck driver stopped his vehicle on the road and was about to make a U-turn when the bus slammed into the rear. They planned to track down the missing driver.