The Department of Land Transport Tuesday ordered Uber Technologies Corp to stop using private cars in its smartphone-based taxi-booking operation and will seek larger fines against drivers who continue to accept customers.

Mr Teerapong said Easy Taxi and Grab Taxi use existing, regulated taxis registered with yellow- or green-lettered licence plates, which legally are used as public vehicles. Only Uber, which also uses privately registered "black-plate" or newly purchased "red-plate" vehicles, is in violation of vehicle-use provisions of the Motor Vehicle Act, he said. 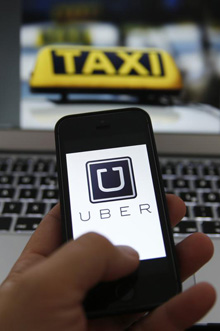 If Uber wants to continue to operate those vehicles, he added, it must bring them into compliance with the department's regulations.

Mr Teerapong also said he would ask the Information and Communication Technology Ministry to check whether Uber's use of a smartphone app or web browser posed a safety risk to passengers.

In a statement issued following Monday's meeting, Uber - which calls its transportation services provided by owners of private vehicles "ride-sharing" - said it "respects" the department and its "important role as the key regulator on vehicle-for-hire transport in Thailand."

But the company noted that 14 other jurisdictions already have "embraced" its service by "creating progressive and permanent regulatory frameworks for ridesharing - a transportation alternative that didn't even exist three years ago."

"We look forward to continued conversations with the DLT to bring our innovative transportation solutions within the appropriate regulatory framework in Thailand," Uber said.

An Uber executive told the Bangkok Post Monday night that prohibitions against privately owned cars do not affect any part of its premium Uber Black service, which use drivers from licensed limousine and transport companies who are fully registered, have commercial insurance and are accredited by the government.

The only impact will be on a portion of the recently launched Uber X service, which uses a mix of privately operated compact cars and registered public-use vehicles.

However, some Uber drivers have already felt the impact of the land-transport department's Nov 28 declaration that Uber was operating illegally in the kingdom. Mr Teerapong said about a dozen drivers already have been fined 2,000 baht.

He said he felt the fine for using improperly licensed vehicles are too weak. If black-plate vehicles continued to be found on the streets, he will discuss stiffer measures with the Office of the Attorney-General.

Mr Teerapong said the department has no information how many vehicles currently work for Uber, as the company has not reported details to the department nor does the law recognise taxi services offered through the Internet.

He again warned the public to not ride in improperly licensed vehicles used by Uber, saying existing regulations aimed at protecting the welfare of public-transport passengers do not cover riders in Uber vehicles in case of accident or other problems.

The department, he added, is drawing up new regulations to cover the new high-tech services to protect passengers and ensure fair and reasonable service fees.

Uber, for its part, also hopes to see some updated rules.

"Our goal is simple: We want to keep Thailand moving forward in a way that increases safety and reduces congestion," the company said in its statement. "Uber gives consumers more choice and drivers greater income potential, while providing the city with a more-efficient transportation system."