WASHINGTON – The US Senate report released early Wednesday delivered a damning indictment of CIA practices, accusing the spy agency of inflicting pain and suffering on prisoners beyond legal limits - but offered no new information on the location or Thai government involvement in its first waterboarding facility.

The US report will change no minds about water-boarding and other "enhanced interrogation" of terrorists. It officially confirms that a still-secret safe house in Thailand was the site where two top al-Qaeda suspects were water-boarded. Abu Zubaydah (top) was al-Qaeda's coordinator of external contacts and foreign communications, and took part in planning all major terrorist attacks. Before his capture, Abd al-Rahim al-Nashiri was the chief of operations for al-Qaeda in the Persian Gulf and masterminded the bombing of the US Navy's USS Cole in October, 2000.

Treatment in secret prisons a decade ago was worse than the government told Congress or the public, said the report from the Senate Intelligence Committee, the first official public accounting after years of debate about the CIA's brutal handling of prisoners.

In Thailand, there was disappointment, as the report blanked out all information about the country's role in waterboarding, housing terrorist suspects from around the world - and the exact involvement of Thaksin Shinawatra government, National Security Agency and Royal Thai Army.

The Bangkok Post learned recently that the US Senate's un-edited report claims the CIA chose Thailand as the site of its safe house because of the close ties between the US agency and Thai intelligence officers. According to this report, then-prime minister Thaksin was not informed until after the safe house was actually operating.

Then-president George W Bush and his vice-president Dick Cheney knew that the site was in Thailand, the report says. But the heavily censored version released Wednesday provides no information about the Thai government, intelligence or military involvement.

Thaksin was prime minister at the time and committed Thailand to helping the US, including sending Thai troops to both Afghanistan and Iraq.

"Thailand offered to help the CIA," said a US source familiar with the contents of the uncensored US Senate report. As the number of detainees in US hands grew, the US refurbished a large compound in Poland that replaced the Thailand safe house, and torture on Thai soil ended when the temporary detention side closed in December, 2002, or January, 2003.

A lengthy section of the redacted report released Wednesday - just 499 pages of the original 6,700, and most of those blotched by blacked-out sections - contains extensive details on the capture in Ayutthaya in August, 2003, of the Jemaah Islamiyah terrorist chief Hambali.

The section is presented as a "debate" about whether the harsh interrogation of another terrorist was necessary to find out where Hambali was staying.

But it is the only mention of Thailand in the entire report.

Thousands of hours by investigative reporters and others have been able to cut through the secrecy to find out more about how the CIA came to use Thailand as its first "world headquarters for Thailand".

The location of Detention Site Green, the code name of the safe house used by CIA agents to hold and interrogate terrorists, remains secret.

Below is a typical page from the report, in the section about the capture of Hambali in Ayutthaya. Almost every page of the 500-page report is similarly "edited" to take out still classified material. 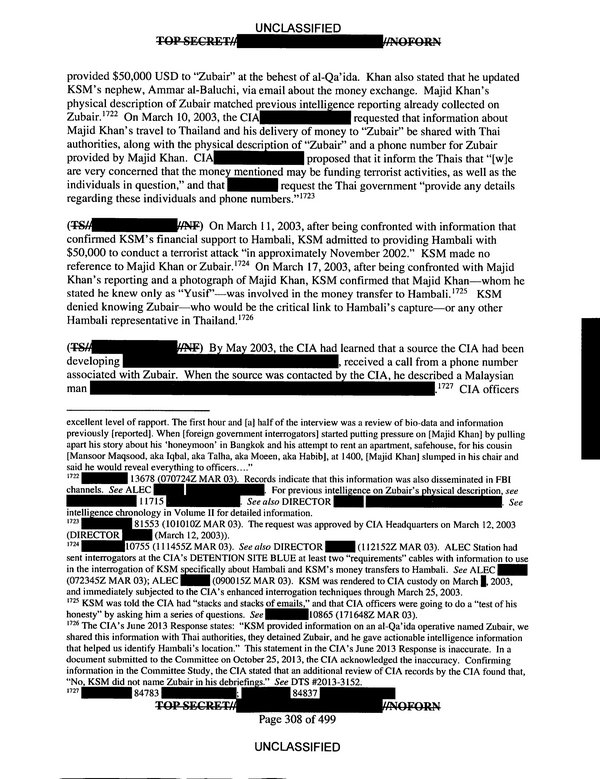 President Barack Obama declared the past practices to be "contrary to our values" and pledged, "I will continue to use my authority as president to make sure we never resort to those methods again."

Sen Dianne Feinstein, a Democrat and the committee chairman, branded the findings a stain on the nation's history.

"Under any common meaning of the term, CIA detainees were tortured," she declared, commanding the Senate floor for an extended accounting of the harsh techniques identified in the report.

Tactics included weeks of sleep deprivation, slapping and slamming of detainees against walls, confining them to small boxes, keeping them isolated for prolonged periods and threatening them with death. Three detainees faced the simulated drowning technique known as waterboarding. Many developed psychological problems.

After al-Qaeda operative Abu Zubaydah was arrested in Pakistan, the CIA received permission to use waterboarding, sleep deprivation, close confinement and other techniques. Agency officials added unauthorised methods into the mix, the report says.

Zubaydah was held in a secret facility in Thailand, called "Detention Site Green". Early on, with CIA officials believing he had information on an imminent plot, Zubaydah was left isolated for 47 days without questioning, the report says. Later, he was subjected to the panoply of techniques. He later suffered mental problems. 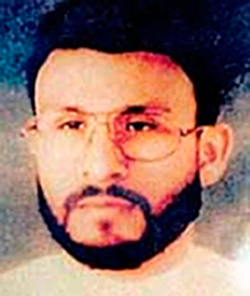 This undated file photo provided by US Central Command, shows Abu Zubaydah, the CIA’s guinea pig. He was the first high-profile al Qaeda terror suspect captured after the Sept 11 attacks and the first to vanish into the spy agency’s secret prisons in Thailand, the first subjected to grinding white noise and sleep deprivation tactics and the first to gasp under the simulated drowning of waterboarding. (AP photo)

At least five men in CIA detention received "rectal rehydration," a form of feeding through the rectum. The report found no medical necessity for the treatment.

Others received "ice baths" and death threats. At least three in captivity were told their families would suffer, with CIA officers threatening to harm their children, sexually abuse the mother of one man, and cut the throat of another man's mother.

But the "enhanced interrogation techniques" didn't produce the results that really mattered, the report asserts in its most controversial conclusion. It cites CIA cables, emails and interview transcripts to rebut the central justification for torture - that it thwarted terror plots and saved American lives.

In a statement, the CIA said the report "tells part of the story" but "there are too many flaws for it to stand as the official record of the program."

The report, released after months of negotiations with the administration about what should be censored, was issued amid concerns of an anti-American backlash overseas. American embassies and military sites worldwide were taking extra precautions.

Earlier this year, Feinstein accused the CIA of infiltrating Senate computer systems in a dispute over documents as relations between the investigators and the spy agency deteriorated, the issue still sensitive years after President Barack Obama halted the interrogation practices upon taking office.

"The programme led to the capture of al-Qaeda leaders and took them off the battlefield," said George Tenet, CIA director when the Sept 11, 2001, attacks occurred. He said it saved "thousands of American lives."

Not so, said Democratic Sen Harry Reid, the Senate majority leader. "Not only is torture wrong, but it doesn't work," he said. "It got us nothing except a bad name."

President George W Bush approved the programme through a covert finding in 2002, but he wasn't briefed by the CIA about the details until 2006. At that time Mr Bush expressed discomfort with the "image of a detainee, chained to the ceiling, clothed in a diaper and forced to go to the bathroom on himself." Mr Bush said in his 2010 memoirs that he discussed the programme with CIA Director George Tenet, but Mr Tenet told the CIA inspector general that never happened.

He wasn't alone. In September 2002, at a facility referred to as COBALT- understood as the CIA's "Salt Pit" in Afghanistan - detainees were kept isolated and in darkness. Their cells had only a bucket for human waste.

Redha al-Najar, a former Osama bin Laden bodyguard, was the first prisoner there. CIA interrogators found that after a month of sleep deprivation, he was a "broken man." But the treatment got worse, with officials lowering food rations, shackling him in the cold and giving him a diaper instead of toilet access.

Gul Rahman, a suspected extremist, received enhanced interrogation there in late 2002, shackled to a wall in his cell and forced to rest on a bare concrete floor in only a sweatshirt. The next day he was dead. A CIA review and autopsy found he died of hypothermia.

Justice Department investigations into that and another death of a CIA detainee resulted in no charges.

During a waterboarding session, Zubaydah became "completely unresponsive with bubbles rising through his open full mouth," according to internal CIA records.

Khalid Sheikh Mohammed, the Sept 11 mastermind, received the waterboarding treatment 183 times. Though officers noted he wasn't becoming more compliant, they waterboarded him for 10 more days. He was waterboarded for not confirming a "nuclear suitcase" plot the CIA later deemed a scam. Another time, his waterboarding produced a fabricated confession about recruiting black Muslims in the state of Montana.

After reviewing 6 million agency documents, investigators said they could find no example of unique, life-saving intelligence gleaned from coercive techniques - another sweeping conclusion the CIA and Republicans contest.

The report claims to debunk the CIA's assertion its practices led to bin Laden's killing. The agency says its interrogation of detainee Ammar al-Baluchi revealed a known courier was taking messages to and from bin Laden.