An image of Adolf Hitler appears in one of the films commissioned by the Prayut Chan-o-cha government to promote Thai values — and the film's director doesn't understand what the fuss is about. 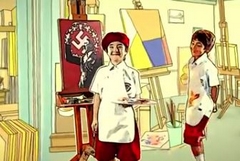 An image from the video '30' shows students with a Hitler portrait. The video has since been removed from YouTube.

The 11-minute film has already been shown in cinemas across the country but the offending scene had caused a "slight misunderstanding" and would be replaced, a senior minister said on Wednesday.

The film called 30 was directed by Kulp Kaljaruek, also a manager at Kantana Group, one of the country's largest production companies, which is owned by his father. It is one of 12 productions in the "Thai Niyom" (Thai Pride) series commissioned by the Prime Minister's Office.

In the film, a schoolboy is briefly seen painting a portrait of Hitler, which his classmate then applauds. There are no other references to the German dictator in the film, which was intended to illustrate the value of "learning about democracy".

"I didn't think it would be an issue," Mr Kulp was quoted as saying by the local newspaper Khaosod after a clip of the scene was posted on the internet. The clip was pulled from YouTube after the newspaper asked a government spokesman to comment on it but it is still available in other places.

"As for Hitler's portrait, I have seen so many people using it on T-shirts everywhere. It's even considered a fashion. It doesn't mean I agree with it, but I didn't expect it to be an issue at all," he was quoted as saying.

"[Hitler] is the character of this child," Mr Kulp explained, referring to the film's spoiled, wealthy schoolboy who always gets his way. "He's always been 'number one,' and he's selfish.

"Hitler is also a 'number one,' in a bad way. He was good at persuading a lot of people, but he refused to listen to the majority. He was always arrogant. That's why the war happened."

Asked if the Hitler image was intended as a subversive comment on the whole "12 Values" campaign begun by the coup leader and prime minister, the director said: "I didn’t want to have anything to do with politics. I didn’t want my film to affect anyone."

ML Panadda Diskul, the Prime Minister's Office minister, called the uproar a "misunderstanding" but said the Nazi imagery would soon be replaced.

ML Panadda told The Associated Press that the boy shown painting the image of Hitler was trying to compare his mother to a dictator, in a rebellious jest.

In the video, however, there is no such explanation.

"The film is good, but it has caused a slight misunderstanding in our society," he said. "We won't stop the project, but we will replace that problematic picture with another, more proper one."

Israel's ambassador to Thailand, Simon Roded, issued a statement saying he was "deeply saddened to see this trivialisation and misuse of Nazi symbols in an official Thai movie".

"I was surprised that throughout the screening process this movie must have gone through to be approved for public broadcast, none of the smart, well educated people checking it had identified it as being problematic and offensive," Mr Roded said.

"If we learn anything from this incident it is that Holocaust education, especially its global messages of tolerance, should be introduced into the Thai curriculum."

Mr Kulp told AFP he did not mean to cause offence but instead was trying to illustrate the child's moral progress.

"It's symbolic. The child is going in the wrong direction," he said. "You know Hitler had quite strong power in the past. But not in a good way. So it's like [the boy] is learning from that until he becomes a good person at the end."

The director confirmed that the junta had approved the film but said "nobody asked" about the contentious scene.

Gen Prayut's 12 Values have also been made into a poem that students at public schools are required to memorise.

Col Sansern Kaewkumnerd, a spokesman for the PM's office, told Khaosod that he hadn't seen the film. Explaining why an image of Hitler might have appeared he said: "If I were to make an uneducated guess, it may have been intended to say that democracy has good and bad sides."

Responsible History Education Action, a website set up by an American expat to combat the use of Nazi imagery in Thailand, issued a statement expressing its dismay.

Students dressed in Nazi uniforms with swastika armbands march during a sports day at Sacred Heart College in Chiang Mai in 2011. (EPA Photo)

"This is a massive failure of understanding of history by a Thai government administration that has explicitly mentioned wanting to teach history," it said.

"We are concerned and deeply saddened that the image of Hitler and a Nazi swastika was featured in a government video meant to extol values to the Thai people."

Hitler has surfaced in Thailand many times in unusual settings, treated as a pop-culture image, no different from a Che Guevara T-shirt. Many blame the education system for failing to teach students about Hitler's role in World War II and the killing of 6 million Jews.

Three years ago a group of students at a private school in Chiang Mai dressed up in Nazi gear for a sports day. The school claimed it was unaware of the students' plans, and said it would improve its history teaching.

In July last year, a "Superhero Hitler" mural at Chulalongkorn University briefly became a popular backdrop for graduation photographs. The school apologised for the billboard, which featured the dictator surrounded by the likes of Superman and Batman. It was removed two days later.