Sudathip Muangnual, one of the people arrested in the recent police purge, was detained again on Wednesday on a lese majesty charge and will be held in detention after appearing in the Criminal Court on Thursday, the Metropolitan Police Bureau (MPB) commander said. 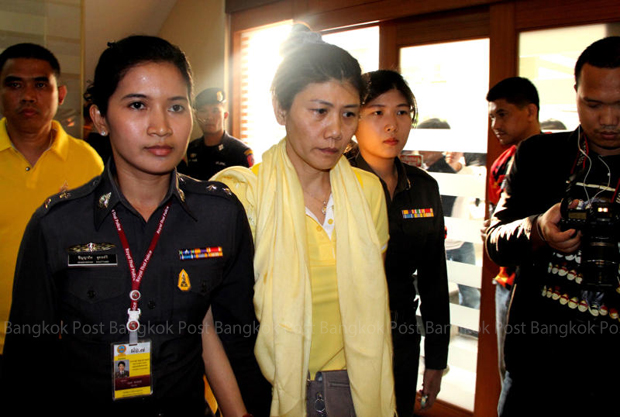 Sriwara Rangsitphramanakul said Mrs Sudathip was arrested at a house in the Thawi Wattana area after police at Samsen station received a complaint accusing her of citing the high institution to operate businesses including a restaurant at Suvarnabhumi airport.

She was taken to Samsen police station where the complaint was lodged and then was escorted by police to the MPB head office. She will be be sent to the court for detention on Thursday, Pol Lt Gen Sriwara said.

Mrs Sudathip is the wife of former Samut Sakhon immigration chief Pol Col Kowit Muangnual. The couple were among a number of people arrested on Nov 22 on land encroachment charges in connection with former Central Bureau Investigation chief Pol Lt Gen Pongpat Chayapan. They were later released on bail.

Police issued an arrest warrant for her on Wednesday on the new charge and are going after three more suspects on the same charge.

Pol Lt Gen Sriwara said investigators were finding out whether her husband or other persons were involved in the fresh allegation. Police would ask the court for arrest warrants if interrogation leads to more suspects, he added.

The Criminal Court on Wednesday sentenced former Democrat Party MP Vachara Phetthong to a 32-month suspended prison term and fined him 320,000 baht for defaming Chatchawal Apibansri, then a member of the National Legislative Assembly (NLA), in 2018.

Prime Minister Prayut has been cleared by the Constitutional Court of any wrongdoing in his continued occupancy of army housing after retirement and while prime minister.

Thailand's tourism-dependent economy should receive 8 million foreign visitors next year and see a recovery to a pre-coronavirus pandemic level of 40 million visitors by 2024, Finance Minister Arkhom Termpittayapaisit said on Wednesday.