Police yesterday arrested the wife of a former Samut Sakhon Immigration Police chief on a lese majeste charge, which has been added to previous charges of public land encroachment. 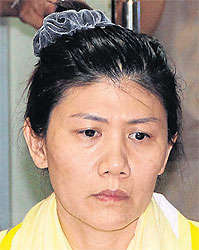 Late last month, Ms Sudathip was arrested with Pol Lt Gen Pongpat, her husband and other alleged accomplices on a number of charges, including demanding money from illegal oil operators, running gambling dens and money laundering. She was also alleged to have constructed buildings on forest land.

But Ms Sudathip evaded the lese majeste charge at the time because police did not have enough evidence, and she was released on bail on Nov 24.

A police source said Ms Sudathip is accused of citing the royal institution to help her win a contract to supply food for an establishment. People affected by Ms Sudathip's alleged misconduct lodged complaints with Sam Sen police station on Tuesday, the source said.

Stocks of cinemas, restaurants, retailers and department stores that were laggards during the lockdown can expect growth after the curfew is relaxed.