A Vietnamese fishing boat is left in flames after the Indonesian navy caught its crew fishing illegally on Dec 5, 2014, off remote Anambas Island. (AFP photo)

Even as Thailand’s fishing industry complains about poaching by Vietnamese fishermen, industry associations are warning Thai boats to beware being sunk by authorities in Indonesia who catch them illegally trawling there. 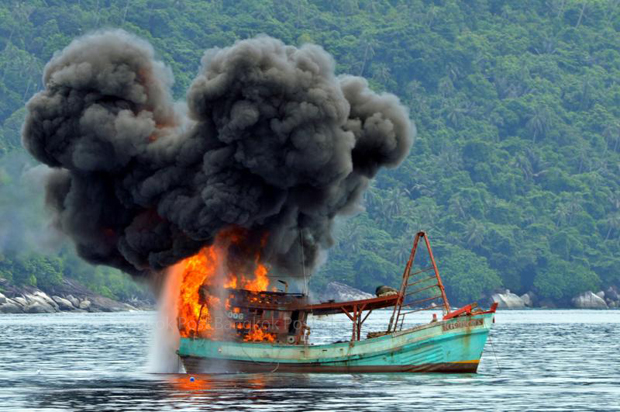 A Vietnamese fishing boat burns after the Indonesian navy blew up the vessel on Dec 5, 2014, due to it fishing illegally off the remote Anambas island.

Indonesia vowed to sink all ships stealing their fish in a bid by President Joko Widodo, better known as Jokowi, to protect domestic marine resources. Indecisive action in the past had led to the loss of 300 trillion rupiah (780 billion baht) a year from illegal fishing and 5,400 illegal trawlers illegally plied Indonesian waters, the Antara news agency quoted him as saying several times during his recent presidential campaign.

Jakarta backed up its threats by capturing 155 foreign boats through Tuesday and sinking three Vietnamese trawlers a day before the policy's official launch date.

''We sunk three of them on Friday (Dec 5) to teach them a lesson, so that they will give up poaching in Indonesian waters," Jokowi told Antara Dec 6.

After taking criticism from foreign governments, Jokowi again defended his decision on Dec 9, calling it a necessary deterrent.

"I asked our foreign minister to explain that this is a purely criminal issue and has nothing to do with neighbourly relations," Mr Widodo told AFP. 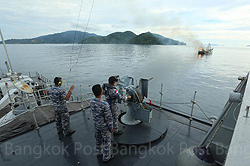 The Indonesian government also has set up a fish-theft eradication task force on Monday to investigate violators of fishing laws and improve licensing procedures, the Indonesia official news agency reported.

But Mr Praporn admitted Thai trawlers might be undeterred by sinking threats and would continue risking an incursion into Indonesian waters.

"Fishermen have to survive. They could not bear the loss in every trip out to the sea and we have to admit that almost no fish is left in Thailand," he said. "Sometimes they have to take the risk."

Mr Narin said the Vietnamese boats used destructive fishing methods to collect sea cucumbers, damaging the environment, and he called on security authorities to solve the illegal fishing by problem through diplomatic channels.

With Indonesia, however, Mr Praporn accused corrupt authorities there of seizing Thai ships - even those with legal fishing licenses - and demanding money in exchange for their release.

He said trawler owners for years have paid through brokers to take their catches back to Thailand.