Police have added another emergency hotline "1599" as an option for people calling for assistance, following complaints that the existing 191 hotline is always busy. 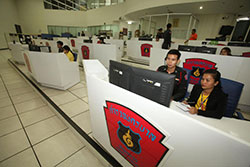 Police answer calls made to the 191 hotline centre, which has now been augmented with a second emergency hotline number, 1599. (Photo by Pornprom Satrabhaya)

Police were now also required to reach trouble-places in Bangkok within five minutes of receiving a phone call, said Pol Gen Ruengsak.  The number of staff at the 191 hotline operation centre had also been increased to handle 60 calls at a time.

‘’On top of this, the RTPO will install more closed-circuit television cameras in another 861 risk areas. The CTVs will be linked to the Traffic Police Division’s control centre and street lighting will be installed in areas at risk of crime,’’ said Pol Gen Rueangsak.

He has instructed police to answer all calls made to the hotline. Most hoax callers were found to be children, he said. Officers could only warn them not to do it again. Adults who made hoax calls were fined of 500 baht each, he said.

Earlier, an amateur photographer who found the body of a Swedish man hanged in an abandoned building claimed he would not reach the 191 hotline service.

Last week, Nattawat Wasathian, 33, said he had to take to the Pantip webboard to raise the alarm after he failed in his efforts to get any help from the police.

The man said he tried calling 191 several times to alert the authorities, but the line was always busy.   He found the body on one of the top floors of the derelict, unfinished Unique Tower on Sathorn Road.

There has been widespread criticism of the police emergency call service by people who say they could   never get through.