Over 200 police officers promoted by disgraced former Central Investigation Bureau chief Pongpat Chayapan are expected to be transferred to remote posts outside the mainstream in a massive reshuffle at the CIB. 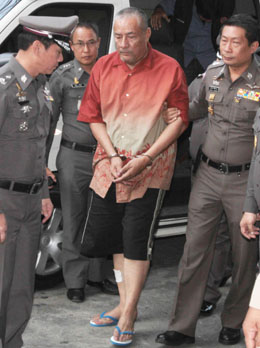 The biggest transfer at the Central Investigation Bureau is expected after the arrest of its former chief Pongpat Chayapan. (Photo by Apichit Jinakul)

A source at the Crime Suppression Division (CSD) said on Monday that 202 officers would be transferred. It would be the biggest single reshuffle ever at the CIB.

The source said the massive reshuffle is aimed at improving the image of the CIB. The 202 officers affected had all been promoted during the tenure of Pol Lt Gen Pongpat, the source said.

The 202 officers are from the level of inspector up to that of deputy commander. It affects all units under the CIB.

The source said 50-60 officers, or 25%, of those to be transferred work at the CSD. Smaller numbers work at the Highway Police, the Technology Crime Suppression Division and the Marine Police Division.

Their transfers to remote areas were meant as punishment as there was no evidence to officially link them with any of the alleged illicit operations run by Pol Lt Gen Pongpat's cartel.

The source said preparations for the transfers were being delayed because of a lack of officers willing to move to the CIB.

Pol Col Jirapop Puridet, a superintendent at the Tourist Police who is acting as the chief of the CSD sub-division 1 supervising Bangkok, will be confirmed in the position at sub-division 1 and succeed Pol Col Akkharawut Limrat, who fell to his death in suspicious circumstances after being apprehended, along with other alleged members of Pol Lt Gen Pongpat's cartel, in November.