The economics of today’s cheap mobile phones and virtually free calling don’t apply behind the walls of Thailand’s prisons where a cellphone can cost up to 2.5 million baht and inmates charge calls at the rate of 2,000 baht a minute. 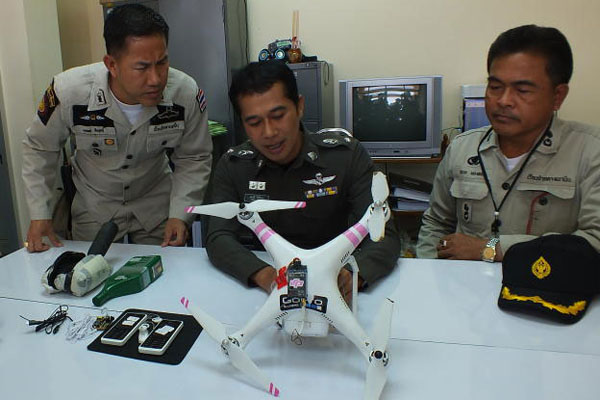 Officials examine an aerial drone seized together with mobile phones near the Khao Bin maximum-security prison in Ratchaburi province in July. (Photo by Saichon Srinuanjan)

Chamaiporn Kaewkamnerd, an official at the Khao Bin maximum-security prison in Ratchaburi province, said a mobile phone for inmates was priced at 2 million to 2.5 million baht while phone calls were charged at 2,000 baht per minute. Suppliers of the phones enforced the high prices and fees with passcodes applied to unlock the smuggled devices.

She noted that satellite phones - which are impervious to conventional cellphone jammers - also have been smuggled into prisons and cost 3 million baht. However, many inmates did not want them because they are difficult to use.

At Khao Bin, aerial drones equipped with robotic arms were used to drop cellphones at specific locations inside the compound. Staffers at the Rayong prison said the Google Maps application was used to designate coordinates where drones would drop their illicit payloads.

In other cases, phones and drugs were tied to arrows shot from some 150 metres away. Some suppliers even used fishing rods and catapult guns to deliver contraband over a range of about 250 metres, Mrs Chamaiporn added.

Much like in the outside world, the mobile-phone industry inside prisons is highly regulated.

Mrs Chamaiporn said inmates involved in phone-service rings are assigned specific duties. Some are tasked with holding phones and operating them to dial and accept calls, giving callers only wired headsets.

Headset cords were modified with cords reaching 180-200 metres, allowing phone operators to remain on the first floor even for callers on the fourth floor. They were connected through wires inserted in drains.

"Headsets seized at the Khao Bin Central Prison may be the world's longest," Mrs Chamaiporn said.

Twenty-nine officials have been prosecuted and 59 prison governors transferred over the smuggling of contraband. Corrections officials search for banned items at the Klongprem Central Prison in Bangkok in June. (Photo by Pattanapong Hirunard)