Thailand has asked countries where lese majeste suspects are believed to be hiding to extradite them so they can face legal action, Deputy Prime Minister Prawit Wongsuwon said Wednesday.

Gen Prawit, who is in charge of security affairs, said Prime Minister Prayut Chan-o-cha wants all fugitives in lese majeste cases who have fled abroad, including Thammasat University history lecturer Somsak Jeamteerasakul, to return and fight the cases.

He declined to reveal how many suspects are on the government's wanted list and in which countries these suspects are believed to be hiding. 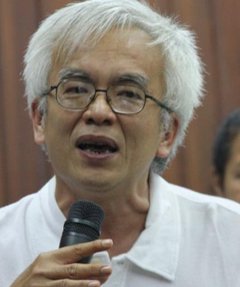 Gen Prawit, who is also defence minister and deputy chairman of the National Council for Peace and Order (NCPO), said some of those countries do not have an extradition treaty with Thailand, or a lese majeste law, which causes problems.

What Thailand can do is ask for cooperation from those countries. Interpol has also been asked for help in extraditing these suspects, he added.

Meanwhile, Deputy Defence Minister and army chief Udomdej Sitabutr says criticism of the monarchy worries the prime minister. However, he denies the law clamping down on lese majeste is being applied too stringently.

The army is working with various agencies to tackle the problem, he said.

"I think most people in the country love and respect the monarchy while only a few have a different point of view," Gen Udomdej said.

"They [people opposed to the lese majeste law] may forget that our nation has remained peaceful for as long as it has because we have a monarch who has long been the soul of the nation and who has dedicated his time and energy to his people," Gen Udomdej said.

Asked if the lese majeste law has been abused for political reasons, Gen Udomdej said he had not come across such a case and insisted the law is used sparingly and only when necessary.

The government is duty-bound to abide by the law and has never overstepped its authority, he said.

"I can say that the government has never abused any law to intimidate anyone,'' Gen Udomdej said.

As for Mr Somsak, security officials are working to bring him back to face legal action, he said.

"Once again, the law must be upheld and whoever breaks it doesn't deserve support from the public. If we all cooperate, the [lese majeste] problem will subside," Gen Udomdej said.

Mr Somsak went into exile soon after the May 22 coup.

He recently reactivated his Facebook page following a six-month hiatus.

The Bangkok military court on June 16 named Mr Somsak as one of seven people who defied an NCPO summons.

The Foreign Ministry revoked his passport the following month.