Thailand has become the hub of the drug trade in the Association of Southeast Asean Nations (Asean), with the highest rate of proliferation, Justice Minister Paiboon Koomchaya said on Thursday.

Gen Paiboon said this in his speech at the launch of a compulsory drug treatment and rehabilitation project. 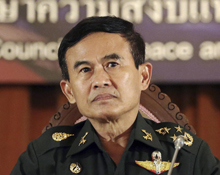 He said that according to reports from the Office of the Narcotics Control Board (ONCB) and the Narcotics Suppression Bureau (NSB), about 1.3 million people, or 2% of the Thai population, are drug addicts.

Of these, about 250,000 have been charged and given terms of imprisonment. The  one million or so others were of major concern because they have not undergone treatment or rehabilitation, either compulsory or voluntary.

Some who went through this process had returned to using drugs.

In Thailand, Singapore and Malaysia drug addicts tended to  be younger and younger, he said.  Children as young as seven have been found to be addicted to drugs.

Since the rate of recidivism was high, he had ordered the ONCB and Justice Ministry to reorganise the treatment system by clearly separating drug addicts outside prisons from those serving time in jail.

Gen Paiboon said he had ordered the collation and examination of drug-related laws now being used by different agencies to ensure they go in the same direction.

Training for military conscripts must be improved because 60-70% of new recruits were found to be drug users or dealers. Training instructors must play an important part in the treatment and rehabilitation process, he said.

Gen Paiboon said he had set a goal of completely curing only about 10% of drug addicts, because he knew it was difficult to achieve the 30% target set in some countries.

He said it has been agreed worldwide that imprisonment is not a way of reducing the number of drug addicts. Most of the more than 200,000 drug offenders serving sentences were small fry.

Gen Paiboon said the ONCB and the Justice Ministry must pay more attention to the drug treatment and rehabilitation process.

"Since drugs are a major threat to the country, if the leaders of any agencies do not cooperate in solving the problem I will ask the prime minister to transfer them," he added.

Meanwhile, 7.6 tonnes of drugs from cases that have already been finalised by the court have been incinerated at Bang Pa-in Industrial Estate in Ayutthaya province.

The drugs, with an estimated street value of 6.5 billion baht, comprised mostly methamphetamine (1.7 tonnes, or about 19 million pills), followed by crystal methamphetamine, heroin and cocaine.

It was the 44th drug-burning ceremony and second such bonfire this year. The seized drugs were incinerated under controlled conditions at the estate’s administrative centre for infrastructure and environment, to prevent pollution.

Most of them were aged 14-25 years and were unemployed, casual workers or farm hands. About 65% were new addicts, and 70%t had used more than one type of drug which made rehabilitation and treatment more difficult, Dr Rajata said.

The ministry expected to bring about 220,000 drug addicts into the scheme next year, he added.