Thailand has the worst drug situation in Asean, says the justice minister. 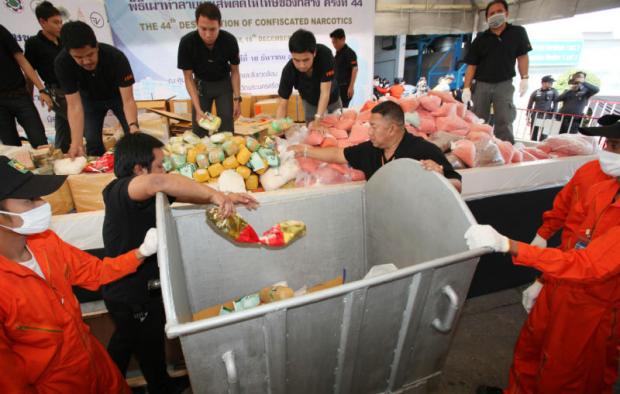 Public Health officials prepare confiscated drugs for incineration at the Bang Pa-in industrial estate in Ayutthaya. A total of 7,646kg of drugs worth more than 6.57 billion baht were destroyed yesterday. Apichit Jinakul

He admits the drug situation in Thailand is more serious than previously thought and says measures underway to rehabilitate addicts have failed to stem the increase in their number.

The country is now a "narcotics hub", said Gen Paiboon Koomchaya, speaking after presiding over the opening of a drug addiction rehabilitation facility.

Citing figures from the Office of the Narcotics Control Board (ONCB) and the Narcotics Suppression Bureau, the minister said Thailand has 1.3 million drug addicts, or about 2% of the population.

Of this number, 250,000 addicts have been prosecuted and imprisoned while the rest are still out of reach, he said.

Even worse, some who undergo rehabilitation still return to drugs, he said.

Addicts are getting younger and younger, a trend shared in common with countries such as Singapore and Malaysia.

Rehabilitation has proven unsuccessful because addicts usually return to drugs again when they return to live in their old environment, he said.

The minister said he had instructed the ONCB and the Justice Ministry to rethink their drug rehabilitation programmes and separate them for addicts who are in prison and those who are outside jail.

He said he has also told state agencies to pull all drugs-related law into one piece of legislation.

Most countries agree that jailing drug addicts is no longer an ideal solution to the drug problem because the measure cannot cure addiction, said Gen Paiboon.

"The more than 200,000 imprisoned drug addicts are actually not key drug dealers. From now on, I will do assessments every 12 months to see how many major drug dealers have been arrested each year," he said.

In some years, up to 60%-70% of conscripts have a history of drug addiction, said Gen Paiboon.

He said the army has set a goal of rehabilitating up to 10% of addicts conscripted into the armed forces.

The drugs destroyed had a total street value of 6.5 billion baht.

Public Health Minister Rajata Rajatanavin said a total of 359,399 addicts have been rehabilitated in the fiscal year, which ended on Sept 30 although the target set was 300,000.

In this fiscal year, the ministry aims to rehabilitate 220,000 addicts, said Dr Rajata.

In Chiang Rai, the Provincial Police Region 5 revealed yesterday it had seized 1.2 million tablets of methamphetamine and 30 kilogrammes of crystal methamphetamine from a car parked at Mae Sai Hospital in Mae Sai district recently.

The suspected owner of the drugs, identified as Natchanan Mahatthanasitthichok, escaped to Myanmar, police said.