Chinese Premier Li Keqiang arrives in Bangkok to witness the signing of two agreements including a train project.

The long wait for new rail system investments ended on Friday after Thailand and China signed an agreement to build new tracks to fulfill Thailand's ambition to improve its hapless train system. 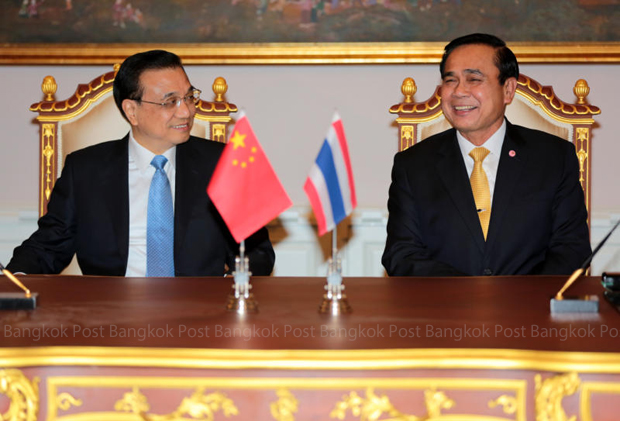 Prime Minister Prayut Chan-o-cha (right) smiles in talks with visiting Chinese Premier Li Keqiang while they witnessed the signing ceremony on the train and agriculture agreements at Government House. (Photo by Chanat Katanyu)

The memorandum of understanding was signed at Government House by Transport Minister Prajin Juntong and Xu Shaoshi, chairman of the National Development and Reform Council of China. The ceremony was witnessed by Prime Minister Prayut Chan-o-cha and Chinese Premier Li Keqiang.

It capped a visit by the Chinese premier who is the most prominent world leader to visit the country since the military seized power on May 22.

Mr Xi will also attend the Greater Mekong Subregion (GMS) summit in Bangkok on Saturday, along with delegates from Thailand, China, Vietnam, Cambodia, Laos and Myanmar.

Under the agreement signed on Friday, China will build the country's first standard-gauge tracks on two routes. The first one will run from Nong Khai province to the Map Ta Phut deep-sea port in Rayong province via Nakhon Ratchasima province and Kaeng Khoi district in Saraburi for 734 kilometres. A second 133-kilometre line will run from Kaeng Khoi to Bangkok.

The project will be carried out on a government-to-government basis with further financial details including the construction cost to be discussed, according to Thai government statement.

The lines will consist of 1.435-metre tracks that will enable trains to run at speeds up to 180 kilometres per hour, and can accommodate high-speed trains up to 250km/h in the future. The State Railway of Thailand currently uses the 1-metre gauge system.

The Xinhua news agency on Thursday estimated the construction cost at US$10.6 billion (350 billion baht).

Construction could start in 2016 and be completed in 2022, according to the agreement.

The two countries agreed that preparation should start as soon as possible. ACM Prajin said early this month that it could begin in February.

Gen Prayut has said that the new system will be built for normal trains only but did not rule out a plan to bring high-speed trains to Thailand in the future.

The train project is in line with plans to improve its rail transport and the country's ambition to be the transport hub linking Southeast Asia with China.

Gen Prayut will visit China on Monday and Tuesday. While there, he plans to take a high-speed train ride from Beijing to Tianjin, said government spokesman Yongyuth Mayalarp said.

The two countries also signed another agreement on agriculture under which China would buy more farm products from Thailand. Commerce Minister Chatchai Sarikulya signed the deal on behalf of Thailand.

Gen Prayut said before meeting with Mr Li that China would buy 2 million tonnes of Thai rice but did not specify the timeframe of the purchase.

Chutima Bunyapraphasara, the permanent secretary for commerce, said the two countries would hold talks in the future about deliveries.