The parent company of the Line mobile-chat application Tuesday denied press reports that government is monitoring messages sent through the service in Thailand.

"No monitoring by the Thailand government has been conducted," Nam Ji Woong, a spokesman for South Korea-based Naver Corp., which owns Line Corp., said by e-mail today. "Line considers consumers' privacy as a top priority." 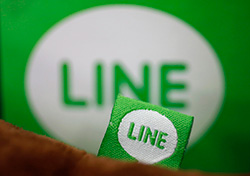 The government was monitoring more than 40 million messages sent via Line each day, Khaosod reported, citing Pornchai Rujiprapa, Thailand's minister of information, communication, and technology. Pornchai said the ministry could see what messages were being forwarded and was focusing on those deemed libellous, anti-monarchy or threatening national security, the report said.

Thailand remains under martial law, which was put in place two days before army chief Prayut Chan-o-cha seized power in a May 22 coup. Those who protest against the junta, either on the streets or online, risk possible trial in military courts. Gen Prayut has said military rule and the crackdown on dissent are necessary to restore order to the country after years of political turmoil.

Gen Prayut, who is now prime minister as well, has put priority on cracking down on critics of Thailand's royal family. Thailand's monarchy is protected by lese-majeste laws that allow for up to 15 years in prison for defaming, insulting or threatening the king, queen, heir apparent or regent. Since the coup the number of lese-majeste cases, including several involving posts on social media, have increased and they are now heard by military courts where there is no chance of appeal.

It's not the first time Line has been accused of collaborating with Thai authorities. According to TelecomAsia.net, Technology Crime Suppression Division police claimed in August 2013 they sent a task force to Japan to ask Naver for access to the Line app for national-security reasons focusing on certain users.

NHN Corp, Naver's Japanese arm, rebutted the claims by Thai police that claimed the message service was secretly cooperating with them in sharing chat logs. CEO Akira Morikawa said chat app would only be released to authorities if NHN were presented with a Japanese court order.