The two Myanmar men accused of murdering two British tourists on Koh Tao will spend another seven months in jail before their trial begins.

The court in Koh Samui on Friday set July 8 as the first day of witness testimony in the trial of Zaw Lin and Wai Phyo, both 21. It will hear prosecution witnesses from July 8 to Aug 28, followed by defence witnesses from Sept 1-25.

The court rejected a defence request to allow witnesses who believe they are at risk to give their testimony in Bangkok, saying the Samui courthouse was safe.

Investigators working for the Myanmar embassy in Bangkok last week said potential witnesses able to prove the men were innocent were too scared to appear in court for fear of retribution by Thai police or their former employers.

"Now we have witnesses but the problem is they are scared. We might need more time and we might have to go to Myanmar to meet them," Nakorn Chompoochart, the head of the legal team, told reporters outside the court

"I'm confident because we have enough information to convince the court that the two did not commit the crime." 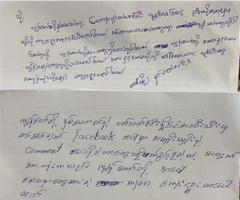 Notes written by murder defendants Zaw Lin and Wai Phyo thanking people for their support were posted by activist Andy Hall on Twitter.

The embassy's investigators said they had interviewed about 40 Myanmar nationals who were working on Koh Tao. They said "strong witnesses" had returned to Myanmar because they were worried they would be implicated in the crime.

Mr Nakorn said he expected the trial to last at least three months.

The two migrant workers are accused of raping and murdering Hannah Witheridge, 23, and murdering David Miller, 24, on the holiday island on Sept 15. They face the death penalty if convicted.

Witheridge, from Norfolk, suffered severe head injuries. Her body was found on a beach near that of Miller, from Jersey. He had been struck on the head and left to drown in shallow surf.

Zaw Lin and Wai Phyo have said they are innocent of rape and murder charges, and that police tortured them to force confessions from them, which they later recanted.

In court on Friday, the presiding judge asked the defendants: "If you were not involved in this crime, tell us who is. Don't be scared."

The defendants replied: "We really don't know. We were drunk and just went back home. We know nothing."

The two accused also gave handwritten notes to Andy Hall, a migrant workers' rights activist who was in court, in which they thanked people for their support.

"Before, we had no chance to prove our innocence. We are victims of influential people," said the note, written in Burmese and posted on Twitter.

Mr Hall told AFP he was disappointed that the accused had to face such a long time in custody.

"The guys say they will stay strong, but it's such a long time to wait," he said, adding that at the same time it "does give the defence time to consolidate its witnesses".

The hearing on Friday was originally scheduled for Feb 25 but was moved up by two months because authorities said the case was urgent. Defence lawyers said the change left them little time to prepare, as they had not had access to materials from the prosecution.

The handling of the case has attracted widespread attention worldwide. The original crime scene was trampled, numerous "suspects" were publicly named and then cleared, and nearly 300 people were DNA tested before officers arrested the two bar workers from Rakhine state on Oct 2.

Police said they had conclusive evidence including DNA found on the victims that was a match to the two accused. However, suspicions have been raised about the DNA tests, which were conducted within 24 hours while other tests took three days or more.

Diplomats from Britain and Myanmar raised concerns about the Thai investigation, and London sent a police team to Koh Tao as observers in October.

The Metropolitan Police are currently preparing a report based on their observations. It is expected to be released in January but would be for internal use only.

Defence lawyers earlier asked the Met for help in clearing their clients, but the British police responded that there was nothing they could offer.

In a letter sent to Reprieve, a prisoners' rights group, the Met said its officers had been privy only to "limited aspects of the investigation" while in Thailand. They were not in possession of any physical evidence, documents or other material, the letter said.

The National Human Rights Commission of Thailand has also expressed concern about the alleged forced confessions. Police have denied the accusations of torture or misconduct.