Regime 'can explain any election delay'

Foreign Minister Tanasak Patimapragorn has pledged to bring the country into the international limelight, claiming the government has regained the confidence of the world community which will help promote Thailand's goals.

Speaking in a special interview, Gen Tanasak, who is also a deputy prime minister, said he rarely communicates directly with the media but that did not mean he is inactive as the foreign minister. 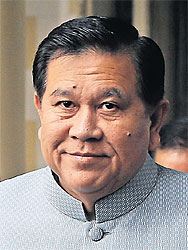 "The MFA and I have been working hard to restore the confidence and credibility of our country and we succeeded as you can see from the reaction of our friends," he said, adding that some countries are doubtful of the roadmap back to democracy but the government will reassure sceptics with action.

"I cannot say what I am going to do next year or in the future as some foreign issues are confidential. But I can assure you that the MFA's performance is good, reflected in our achievements," Gen Tanasak said.

Asked about his role shifting from the military to foreign affairs, Gen Tanasak said security and foreign affairs go well together, which had helped him in his new job. He was familiar with some foreign affairs issues from his old job as supreme commander.

Matters related to human rights and migrant workers were among the examples the foreign minister cited as the issues he has worked on before. He claimed the government is on the right track to resolve problems that affect national security.

However, Gen Tanasak admitted Thailand's low Trafficking in Person's (TIP) ranking by the US government last June was a concern for the government and it has been trying to improve its record since then.

"It is their right to put our country on any level, but we did our best to maintain the security of our country by regulating migrant workers. We set up task forces to handle this issue, hoping the situation will improve," he said.

The government had put in place tighter management of migrant workers, which was a sign of progress.

Regarding the Asean Community, Gen Tanasak said Thailand is ready to join its Asean friends in the single community and the ministers responsible for Asean's three pillars are currently working hard on the process.

"Three deputy ministers are taking care of the three pillars — politics, economics and socio-cultural issues. We may face new challenges or new threats, such as transnational crime, but don't be afraid, we can handle it," he said.

"We have advanced medical services, a diverse economy and a stable security environment. We are still playing a leading role," he said.

Asked about talk the junta could postpone the election, the foreign minister said the government will have clear explanations if the situation comes to that stage but he urged the international community to understand the government's intentions.

"We have been following the roadmap and the previous two stages were completed before the deadline. The final process is now underway with cooperation from concerned parties," Gen Tanasak said.