Drink-driving caused more than a third of the nation's 508 road accidents and 58 deaths on Tuesday, the first day of a week-long road safety campaign launched over the New Year holiday.

Deputy Transport Minister Arkhom Termpittayapaisith said 508 accidents were reported to the Interior Ministry's Department of Disaster Prevention and Mitigation on day one of the campaign, which runs until Monday. 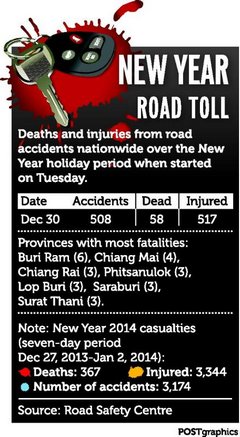 These killed 58 people and injured 517 others, he said.

Mr Arkhom said 37% of the road accidents were caused by drink-driving, while 24% were caused by people driving over the speed limit. Motorcyclists were involved in 82% of the accidents.

Mr Arkhom said most accidents took place on main provincial roads between 4pm and 8pm. Most of the dead were young people.

During the first day of the campaign, 76,168 people across the country were arrested on traffic violation charges including drink-driving, driving over the speed limit, driving without a licence and riding without a safety helmet.

Chiang Mai and Surat Thani were the two provinces with the highest number of accidents, with 23 cases each, while the most fatalities were in Buri Ram, he said.

Mr Arkhom said he is concerned about drink-driving and has asked state agencies to strictly enforce laws against drunk drivers.

Officials have been told to set up service centres on main roads in each province, he said. These centres will help motorists having problems during the New Year holidays.

Mr Arkhom also called on all public bus drivers not to abuse drugs or alcohol.

Volunteers were also asking drunk people in communities not to drive, he said.

Chatchai Phromlert, head of the Department of Disaster Prevention and Mitigation, said authorities must enforce the law banning the sale of alcohol to people under 20-years-old.