A hot-air lantern sucked into the engine of Bangkok Airways jet at Chiang Mai airport forced authorities to cancel the New Year’s flight. 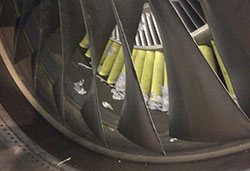 Images showing pieces of a flying lantern in the engine of an Airbus A320 plane at Chiang Mai airport posted on Facebook on Friday drew criticism from many online users and was shared widely on social media.

Facebook user "Bearly de Grizzly" who posted the images said airport officials found lantern pieces and this prompted authorities to immediately cancel the flight on Thursday night for safety reasons. Passengers had to be transferred to other flights.

He claimed to be a technician at the Department of Civil Aviation.

One Facebook user Janat Sanguansak posted a message that the incident took place at 7.40pm at Airbus A320 flight of one airline. The plane which flew from Suvarnabhumi Airport was awaiting passengers at Chiang Mai airport. During the inspection, officials found a lantern got stuck in the engine.

"Luckily, it did not get stuck in the main engine. If it did, it would have caught fire and led to an engine explosion. More damage would have occurred. Who will pay?  Who will be held responsible for a plane crash and deaths," asked the Facebook user.

He blamed those who released hot-air lanterns to float their misfortune away for ignoring the safety of other people.

More than 3,000 Facebook users shared those images and many criticised the release of lanterns.

"A traditional belief of an individual (releasing the release of a lantern to ward off his/her bad luck) will lead to a tragedy of other people,"  Facebook user Nate Aquarius gave a comment.

Lanterns are a mainstay of November's Loy Krathong celebration and have caused a myriad of problems for airports around the country.

This year airlines serving Chiang Mai airport cancelled 112 flights and rescheduled 50 others to avoid problems with the khom loy lanterns.

The airport has warned airlines to exercise additional caution during this holiday period as 206 lanterns have landed on airport property during New Year's. That number surpassed the total from Loy Krathong's yi peng festival. Authorities had gone to much grather lengths in November to promote the danger posed by lanterns. 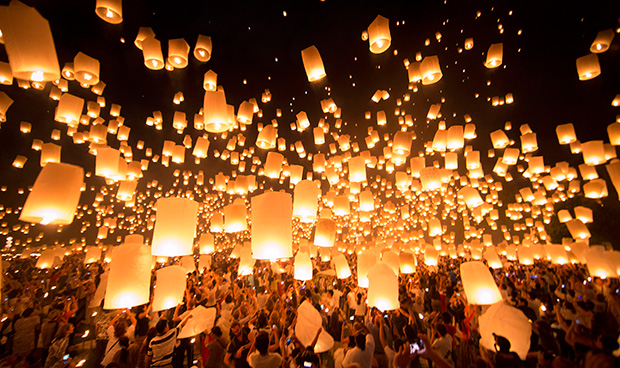