Locals urge action on mine

Tests find high levels of metals in their blood, and in samples of soil and water 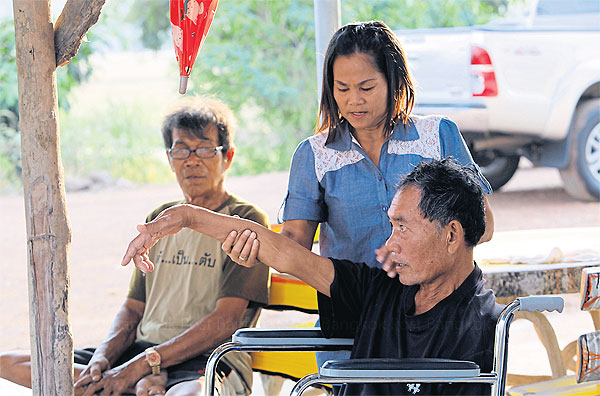 Somkid Thampawech, 57, is confined to wheelchair after suffering muscular weakness. His family believes his condition results from exposure to toxins from a nearby mining operation. (Photo by Apichart Jinakul)

The 57-year-old man has spent the last six months in and out of hospital to treat a condition which leaves him so weak he can't lift his arms or legs.

"He can't even move his lips to speak in a clear manner," said his wife, Jamnian Tampawech.

Her husband was in charge of loading chemical products at the Chatree Mining Complex operated by Akara Resources Plc for 13 years.

She believes his job at the mine exposed him to dangerous metals which have entered his blood and affected his muscular strength.

His urine test showed high traces of metal, though none of the tests conducted so far can prove a conclusive link between his condition and the mine. The same goes for other villagers tested in the area, and local soil and water samples, which have also been found with high levels of metals.

Ms Jamnian said her husband once fell off his motorcycle and was unable to lift it. His doctor diagnosed him with muscular weakness and fatigue — an incurable condition. The only treatment to soothe the pain and address symptoms, she said, is a pill which costs 500 baht each, which her husband has to take twice a day.

While the cost of treatment is beyond their budget, his condition continues to deteriorate.

Suffering uncontrollable muscle spasms and exhaustion when trying to speak, Mr Somkid also has breathing difficulties and has been eating less and choking on his food. "It's as if my husband is lying still and waiting for death to take him away," said Ms Jamnian.

She said Akara Resources should take responsibility for his illness.

Mr Somkid will donate his body to science after he dies in the hope the autopsy result can serve as evidence against the gold mine operators, she said.

But Mr Somkid isn't the only villager who has suffered such symptoms after working in the gold mine. Wutthipong Fangsanoh, a former explosives worker from Phichit, was forced to quit his job at the mine in 2008 after being unable to work for three months.

A blood test found traces of metal components in his blood, said his wife, Namwan.

The couple later learnt from blood tests that the whole family had high levels of mineral substances in their bodies although none other than Mr Wuttiphong has worked in the mine.

Ms Namwan suspected the mineral components could have contaminated the air and the tap water. She said her family members felt itchy and came out in rashes after they used the water.

"Even our jackfruit has a peculiar skin and taste," she said, claiming the fruit and vegetables in her yard have become inedible as they have also been affected by the water.

Akara Resources said the water has been tested regularly and no irregularities have been found. The company said its practices meet public health standards.

Another villager, Jamnian Buakham, complained that life has become more expensive as nobody dares to eat their own produce.

She said villagers believed the communal water in the village must have been contaminated. Ms Jamnian also claimed their crops had stopped producing yields for some years.

Suekanya Theerachatdamrong, a local leader in Phichit's Baan Khao Mor, said Akara Resources Plc has tried to renew its concession over the mine and to seek another concession for its second development phase. Villagers are protesting against the move.

Late last year, Ms Suekanya and the other villagers lodged a petition to the National Council for Peace and Order (NCPO) and the Central Institute of Forensic Science's chief Porntip Rojanasunan.

The petition prompted Dr Porntip to collect samples of blood and urine from over 600 villagers in Phichit and Phitsanulok near the gold mine last November.

The result showed traces of manganese and arsenic, which shouldn't be found in human blood, in more than half the samples, said Ms Suekanya.

"The villagers want to close the Chatree Mining Complex and won't settle for less," she said, adding the operator had ignored their complaints. She said the villagers plan to use the blood test results as evidence to fight the operator.

Arpa Wangkiat, an environmental engineer from Rangsit University and part of a survey team assigned by the NCPO, said experts will collect samples of water, sediment, plant and blood to analyse.

They will look for evidence of poisonous substances such as mercury, lead, cadmium, arsenic and cyanide, she said.

Dr Pornthip said her team found soil and water in the area close to the mine have been contaminated, suggesting the villagers try to not expose themselves more to the toxic elements.

A medical treatment plan would be drawn up for villagers.

In the meantime, tambon administrative organisations in the affected areas have provided water for the villagers.